Dr Hayward has taught anthropology for almost 30 years and conducted extensive ethnographic research in the former Transkei region of the Eastern Cape, especially among amaMpondo communities along the north-eastern coast.

Her doctoral research area is a narrow coastal strip extending from the mouth of the Msikaba River to the mouth of the Mbashe River, also known as the ‘Wildcoast’. The research participants are members of clans founded by European and Asian men who were incorporated into Mpondo and Bomvana societies between 150 and 300 years ago. The research is interdisciplinary, including the collection of oral traditions and ethnography of ritual practice in which such traditions retain contemporary relevance. A review of documented history and Y-chromosome DNA analysis provide additional insight into histories of descent from foreign forebears. Such histories of cultural and racial integration stand out as stark exceptions against the brutal colonial and apartheid contexts in which they occurred, providing alternative models for South Africa’s present and future. 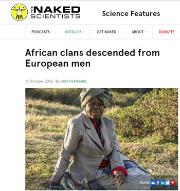