Avinash is an Attorney of the High Court of South Africa, and also serves the Commission for Conciliation, Mediation and Arbitration (CCMA) on a part-time basis as a senior commissioner and specialises in employment equity disputes. As a consultant to the Institute for Social Law and Policy (ISLP), he has been involved in a range of labour and social-security related projects for various government departments and agencies, most recently in relation to the introduction of ‘return to work’ arrangements in South Africa and Namibia. Avinash is an NRF-rated researcher (Category C2) and a member of the South African Young Academy of Science (SAYAS), has published widely in South Africa and abroad on themes related to human rights, with specific emphasis on labour, social security and equality law. He has been the NMMU Faculty of Law Researcher of the Year for the past four years. He serves as an editorial member of a number of foreign journals, peer-reviewer for numerous South African journals and external examiner for various law faculties in South Africa.

No stranger to awards, Avinash was included in the Mail and Guardian’s List of “200 Young South Africans” and the Nelson Mandela Bay Business Chamber’s “Top 40 under 40” list during 2013, and was also a finalist in the Titans Building Nations Award for achievement in academia in 2014. He is also a member of Juta’s Annual Labour Law Seminar presentation team. Avinash is Editor of LexisNexis’ “Introduction to Human Rights Law” and is busy with the second edition of this text, in addition to drafting chapters for international book publications and articles for submission to journals in South Africa.

Avinash gives of himself selflessly for the disenfranchised, he is engaged in a project considering the social security position of non-citizens in South Africa, the Department of Social Development, the Compensation Fund, the Unemployment Insurance Fund and the South African Social Security Agency.

For his commitment to arbitrating for the powerless, Avinash has proved his abilities as both a lawyer and an academic beyond a shadow of a doubt and is worthy of being crowned Emerging Old Rhodian. 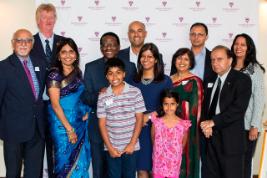