Sorry there was an error sending your form.
Giving to RU
Rhodes>Drama>People>Academic Full Time>Prof Anton Krueger 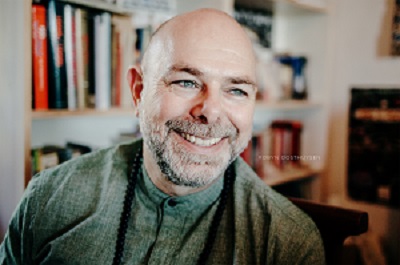 He’s also reviewed theatre and literature for a number of media outlets, including the Mail and Guardian, Sunday Independent, Business Day and The Sunday Times. Anton’s reviews were awarded a Silver Medal from BASA for Arts Journalism in 2017. In 2019 he was invited to be an Associate Curator for the Theatre and Live Art selection for the main programme of the National Arts Festival. His latest scholarly interests include research into mindfulness and spirituality in performance. Anton has also published creative works in a wide range of other genres; including poetry, prose, memoir and drama.

Anton teaches Creative Writing for Performance from undergrad (second year) up to MA level. He teaches on the Theatre Studies program, with a focus on contemporary South African theatre and Performance Studies. He also teaches on trauma, mindfulness and spirituality in performance.

2000 - Mediocrity was the winner of the SANCTA festival and the play was chosen to represent South Africa at the Mondial du Teater in Monaco in 2001. It won the Leverhulme Drama Festival in England, and was a finalist in the Clwyd Community Theatre Association Festival in Wales (in May, 2006). The play also took 17 awards in various festivals in Australia during 2007.

2002 - Living in Strange Lands: the Testimony of Dimitri Tsafendas was nominated for an FNB-Vita award in 2002 and was the runner-up for the Olive Schreiner Award in 2006. It has represented South Africa at festivals in Venezuela (2003) and Argentina (2009) and continues to be performed, most recently in 2014.

2008 - Invitation to participate in Poetry Africa, the premier poetry festival on the continent.

2011 - Runner up for the DALRO Poetry Prize for Nine Notes on Lisbon.

2016 - The comedy story “Jim Goes to Durban” (co-written with Pravasan Pillay) was shortlisted for Short, Sharp Stories 2016 and received a “Highly Commended” by the judges.

In 2012 Anton co-produced and performed in Polis on the Main programme of the National Arts Festival, with Athina Vahla, Mark Wilby and Ford Evanson. This was a series of five inter-disciplinary live art events which interrogated the bicentenary of Grahamstown.

From 2012-2013 he was involved in seven episodes of a series of Interdisciplinary Performance Art events curated by Athina Vahla for the Department of Drama, Rhodes University.

Old Dogs was awarded two staged readings in separate contests: the PANSA Festival of Staged Readings, at the Catalina theatre in Durban in 2012, and the Theatre Arts Admin in Cape Town in 2013.

Altyd [“Always”] was a finalist in the Sanlam Radio Drama Kompetisie and was subsequently broadcast on the national radio station Radio Sonder Grense (Radio Without Boundaries) in November, 2013.

Anton has published over 20 articles and book chapters in peer reviewed publications, and around 100 reviews on books and theatrical productions in print media. His recent scholarly publications include:

2010 - Celebrations of the Spirit of Tragedy – The Dionysian Theatre of Brett Bailey. In Positionen. (Edited by Matthew Krouse, Published in English (Johannesburg: Jacana) and German (Hamburg Steidl).

2010 - Keeping it in the Family: Incest, Repression and the Fear of the Hybrid in Reza de Wet's English Plays Literator 31 (3).
2010 - Fashionably Ethnic: Individuality and Heritage in Greig Coetzee's Happy Natives. Current Writing 22 (1).
2011 - The Failure of Masculinity in Fugard’s Recent Work. South African Theatre Journal 24.
2012 - Die Moderne Self as Toneelpop in Woyzeck on the Highveld ” Literator (4).
2013 - The Implacable Grandeur of the Stranger: Ruminations on Fear and Familiarity in Die Vreemdeling. South African Theatre Journal.

2010 - "Identity and Failure: An Interview between Ashraf Jamal and Anton Krueger”. Scrutiny2: Issues in English Studies (2).
2013 - Gazing at Exhibit A: An interview with Brett Bailey. Liminalities 9 (1).