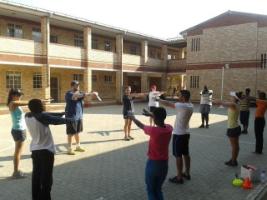 Private schools and former Model C schools experience the benefits of scheduled and structured sports coaching and training most afternoons. These sessions offer scholars the opportunities to learn and master certain sporting codes, understand the principles and rules of the games, appreciate the importance of team work and working towards a common goal and most importantly, the benefits of an active and healthy lifestyle.

Unfortunately, township schools are largely deserted in the afternoons. Specifically, there is negligible organised sport in the afternoons. Organised sport is important for young people for many reasons as outlined above. In the context of township schools, such programs also aid in keeping the youth “out of mischief”. In the suburbs, teachers are expected to coach sport during afternoons as part and parcel of their professional load. This practice and culture does not extend to township schools and teachers. The ones who lose out are the children.

In addition to a limited experience of organised sport in these schools, the majority of the scholars also live in households that are very resource poor. The fact that many local youngsters live in broken homes or with single parents also means that they are vulnerable to anti-social influences. Sport, in some respects, is a constructive counter-veiling influence. Furthermore, in all homes in Joza the home language is isiXhosa. A recent study has shown that limited exposure to English places learners at a severe educational disadvantage, and that the more exposure that learners receive, the better their academic performance. As such, there is an evident need to provide these schools with structured sports and physical training sessions, which would potentially benefit the Joza scholars in a number of ways. These may include, but are not limited to:

With respect to the benefits that the students in HKE could gain, these may include the following:

Started in late February, the Joza Physical Education Project (JPed) aimed to take the experience and expertise of HKE undergraduates and postgraduates with respect to physical training and health to three schools in Joza, namely Nombulelo, Ntiska and Khutliso Daniels.

The project ran for 12 weeks (Feb to June 2014) and took the pupils from each of the three schools through the principals of basic physical testing, where each student was given an exercise manual in which they recorded their own performance during the different tests. Thereafter, the pupils were taken through 7 weeks of physical training, where each week, different exercises were taught to and executed by the pupils. The project aimed to enhance not only their physical performance, but also to increase awareness of the importance of physical activity for general well being. The program ended with the pupils at the schools repeating the different tests to see if any improvements have been made following the physical training.

27 HKE under and postgraduate students participated in the project each week. Going forward, the plan is to assimilate the program in the school Life Orientation curriculum: this will ensure a more consistent student attendance, while providing a more structured course which provides HKE students with the opportunity to teach and tutor the learners.

An exciting development in 2015 is the incorporation of the HKE Phys Ed engagement programme into the school curriculum at Ntsika Secondary School. Initially as a part of the Life Orientation subject programme at Grade 12 level, it will also be introduced from Grades 8-10 as a roll-out over the course of the term. Ms Madeleine Schoeman, Head of Ntsika, has been a key role-player in setting up this formalisation of the programme, together with Mr Jonathan Davy from HKE.

In addition to the Life Orientation syllabus, the scholars themselves requested that the Phys Ed programme continue to run in the afternoons as an extra-mural, as they had so enjoyed the experience in 2014.

In order to ensure that the programme is effectively managed HKE students at all levels are invited and encouraged to get involved with this programme - if you are interested, please contact Jonathan (email j.davy@ru.ac.za). 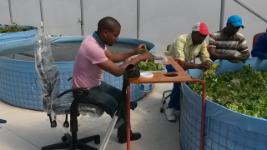 Following a request from the Biological Control Research Group from the Entomology Department at Rhodes University students and staff assisted this group with a basic ergonomics risk assessment and intervention for the individuals employed in their Waainek Research Laboratory. Briefly, the Waainek project employees a number of disabled individuals to harvest insects that are used in natural biological control programs. Employees are required to sit around large ponds and harvest these insects: the conditions are such that they typically adopt very awkward postures to complete the task. This prompted an intervention from the department, which involved postgraduate students and staff providing “low cost, no cost” seating interventions to lessen the strain experienced by the workers during task performance. The project was performed over two months and currently, the perceptions with respect to the interventions seem positive. You can learn more about the Biological Control Group at:

The HKE department, in collaboration with the Rhodes University Health Suite got involved in the Trading Live for Mandela week in 2013: the residents from Cullen Bowles House were taken through the a well-structured and carefully designed training program that focused on teaching them how to exercise effectively using nothing more than their body weight. Fifteen students from the department ran four stations for their 67 minutes, with the program being thoroughly enjoyed by the participating residence. This year, the department will offer seven different events to the public, which include a similar training program, a workshop on basic pilates, a workshop on how to structure an appropriate training program, a talk on how to understand and treat “clogged” arteries and the health implications of using commercially available supplements. You can see the full program at the following:

Over the past two decades the Department of Human Kinetics and Ergonomics has become increasingly involved in performing Ergonomics consultancies both in small/medium enterprises, as well as international companies around South Africa. HKE staff have also hosted Ergonomics workshops as far as Botswana and Namibia.

During the regular school visits throughout the year, learners are given a "hands-on" preview into the scientific discipline of anaysing human responses in various situations, such as in sporting activities, working environments and rehabilitation of injured athletes and workers.

Introduction to Science Concepts and Methods

The HKE module for the Introduction to Science Concepts and Methodology (ISCM) is intended to provide the participating students an insight into the field of human kinetics and ergonomics, while at the same time strengthening basic science concepts employed in this field of study using respiratory physiology as the main focus. 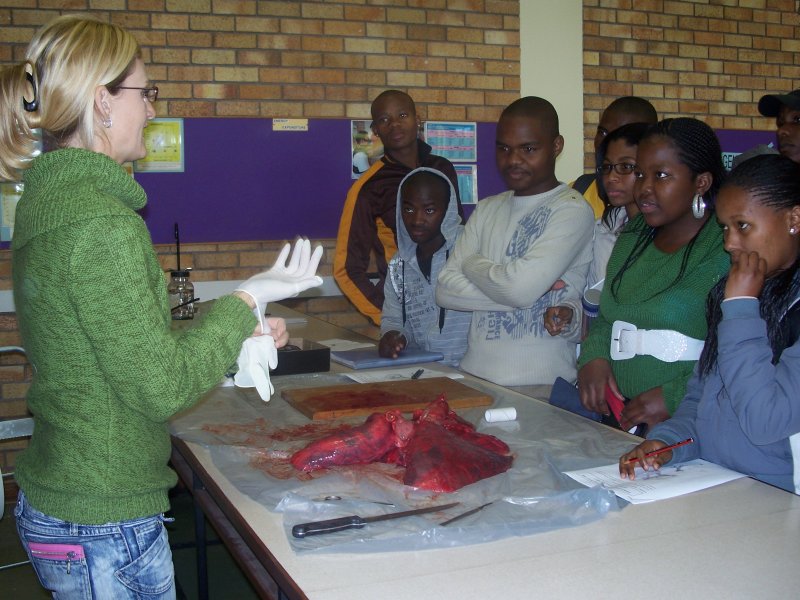