The Institute for Water Research has been involved in the development, testing and application of hydrological models for many years, but in recent years the focus shifted towards the use of uncertainty principles and the further development of the widely used, monthly time step and semi-distributed, Pitman rainfall-runoff model. The key motivation for this research focus was the recognition that we are always dealing with data scarcity or data accuracy problems in the use of hydrological models in Africa and therefore all of the associated uncertainties should be explicitly included, wherever possible. These include uncertainties in the climate forcing data, the model structure and the model parameters.

More recently the focus has been on developing a flexible uncertainty version of the Pitman model that can be used in many different situations. All of the developments have been included in the SPATSIM software framework that is available at no cost from the IWR. The key principle of this version of the model is that the simulated hydrological response of any incremental sub-basin should be constrained by a set of uncertain hydrological indices. These include the mean monthly stream flow volume, mean monthly groundwater recharge depth, three percentage points (10%, 50%, 90%) on the flow duration curve and the percentage time of zero flows (specifically added for arid and semi-arid basins). These indices are designed to represent the natural flow response of the sub-basins and could be quantified in different ways depending on how much information or knowledge and understanding is available about the spatial variability of the natural hydrological response.

The top part of Figure 1 illustrates that the model parameters are defined as ranges of possible values from which the model samples to generate ensembles of possible output time series. These time series are analysed and assessed against the hydrological response constraint indices. If a model output falls within all of the constraints then the result is accepted as ‘behavioural’ and the parameter set saved, otherwise it is rejected. Once a defined number (typically 5 000) of ‘behavioural’ parameter sets have been found for the specific sub-basin the first stage of the model run is complete. The second stage runs the model for the whole basin, including all the sub-basin downstream linkages to generate cumulative flows at the outlet of all sub-basins. The natural hydrological response is simulated using the parameter sets saved from stage 1, while additional uncertainty can be incorporated through independent random sampling of the ranges of routing and water use parameters (in situations where development impacts are important). The model is typically run 10 000 times to generate a large number of output ensembles. The advantages of the two stage approach is that all of the downstream outputs are made up of ‘behavioural’ upstream inputs, as measured against the realism of the hydrological response indices used in stage 1. The final outputs can then be compared with any available observed data (see Figure 2) to validate the success of the model and to assess the degree of uncertainty that has been simulated. 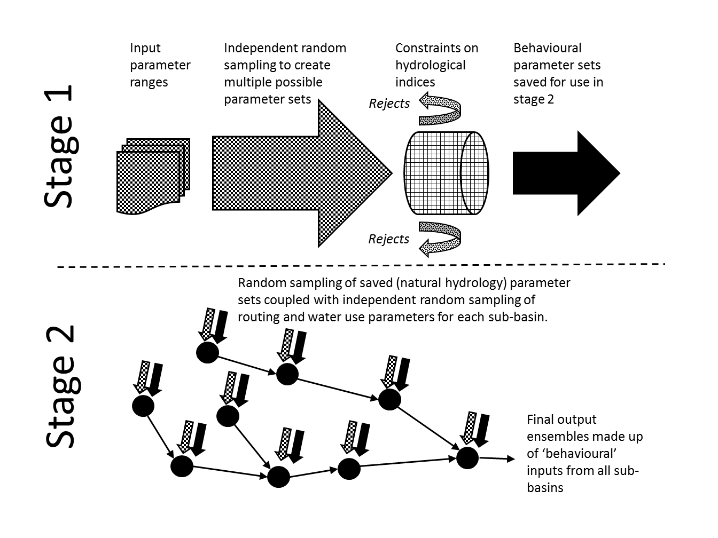 Figure 1: A 2-stage approach to incorporating uncertainty into the Pitman rainfall-runoff model 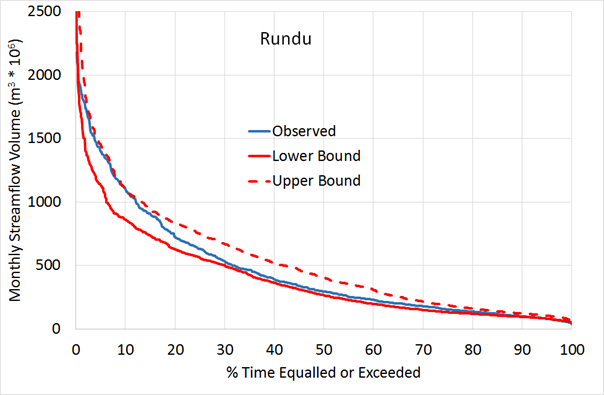 Further details of the contributions to hydrological modelling and uncertainty by the staff and students of the IWR can be found in the publications, research reports and postgraduate theses listed below:

Tshimanga, R.M. and Hughes, D.A. (2012) Climate change and impacts on the hydrology of the Congo Basin: The case of the northern sub-basins of the Oubangui and Sangha Rivers. Physics and Chemistry of the Earth 50-52, 72-83.

Hughes, DA. (2013) A review of 40 years of hydrological science and practice in southern Africa using the Pitman rainfall-runoff model. Journal of Hydrology 501, 111-124.