This year’s John H Jackson (formerly ELSA) Moot Court Competition will continue on virtual platforms in real-time, as finalists compete in the African Regional Round this week.

Rhodes University’s Faculty of Law has historically banked several wins in this moot competition, and the team has been working hard to ensure the latest competition is no different. This is an international moot court competition, based on a fictional set of facts but that incorporates real-world International Trade Law principles.

After applying via written and oral submissions in September 2019, the team was accepted to compete at the African Regional Round in Nairobi, Kenya between 20-24 April 2020. This was preceded by collaborative preparation in the form of a 20-page written argument sent to the organisers by 10 January, which team members worked on remotely during the vacation period.

However, with the devastating outbreak of the novel coronavirus and the resulting lockdown and travel ban restrictions, the continuance and completion of the competition suddenly hung in the balance.

Thankfully, believing the show must go on, the organisers decided to migrate the regional rounds onto a virtual system, a first in the history of the Competition.

“So began an intensive virtual training regime for the team, as of the start of the South African lockdown,” explained Advocate Shuaib Rahim, Senior Lecturer at Rhodes University’s Law Faculty, and Coach of the University’s team. Adv Rahim believes the team’s experience with intensive online collaboration during the vacation period has given them an edge to compete online.

“The team will present twice this week, and a further two times if semi-finals and finals are reached. This week will be the culmination of six months of hard toil and the team is ready,” he said.

The 2019/2020 topic is, as all Jackson Moot topics are, based upon World Trade Organisation (WTO) jurisprudence (body of law). During the competition, both the complainant and respondent states will be argued for.

This moot equips students with practical experience as to how international trade principles are applied in practice, and the procedure for member state dispute settlement.

“In short, this year’s competition is based on the legality and regulatory framework of certain imports of marine goods through the use of a Free Trade Area, by one WTO member against another,” explained Adv Rahim.

This year’s competing team members are: Camilla Warring as Team Captain, and Chloe Brandt and Keanen-Troy Johnson. The team has been assisted by Adv Rahim and Stuart Bentley, a John Jackson Moot Competition alumnus.

“We wish the team best of luck. The consistency team members have shown during these trying times will see them not only prosper during the regional rounds, but hopefully into the finals as well*,” Adv Rahim said.

The top four teams from the Regionals will move on to the Final Round, which is set to be held at the WTO headquarters in Geneva, Switzerland later in the year.

* Shortly after the publication of this article, it was announced that Rhodes University has made it to the top four teams in Africa and is now set to compete in the Grand Finals in Geneva later in 2020. 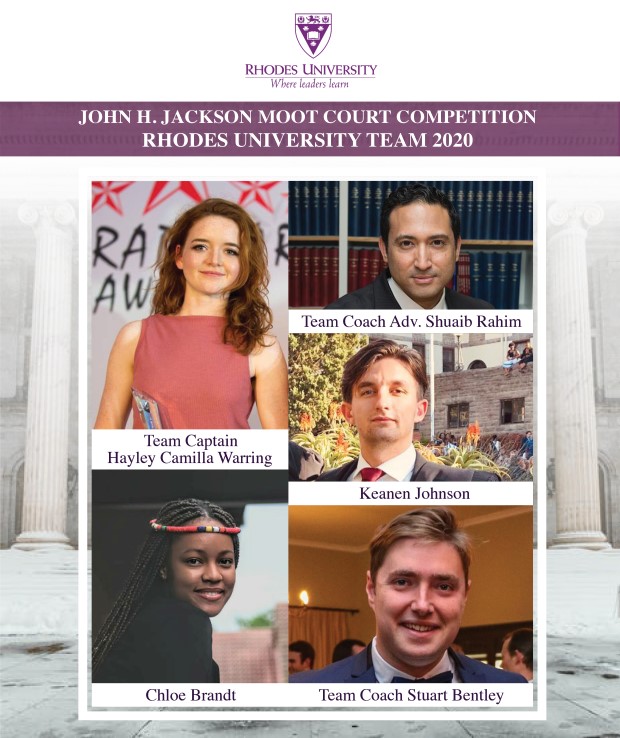 Please help us to raise funds so that we can give all our students a chance to access online teaching and learning. Covid-19 has disrupted our students' education.  Don't let the digital divide put their future at risk. Visit www.ru.ac.za/rucoronavirusgateway to donate