Sorry there was an error sending your form.
Giving to RU
Rhodes>Mathsedchair>Students>Completed Masters Students>Mr Gaus Tshithigona 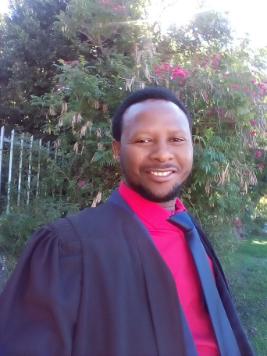 Gaus obtained a certificate in visual art from the Art Performance Centre (APC) in Oshikuku in 1998 after which he did his BETD at the Ongwediva College of Education.  He then registered for an ACE at the University of the North West before doing a BEd(H) at Rhodes University.  He has been a mathematics teacher since 2006.  His research interest is in Indigenous Knowledge systems with a particular focus on recontextualising indigenous knowledge in the context of adopting a visualisation approach to teaching.

It can be argued that the Namibian curriculum is largely influenced by a Western epistemology. However, many studies suggest that learners make powerful meanings of mathematical concepts they are learning if they visualise these and experience them in relation to what they already know from their own cultural backgrounds. According to the Namibian National Curriculum for Basic Education (NNCBE, 2010), it is not only important for learners to acquire mathematical knowledge and skills, but also to develop and grow their identities, cultures and values as individuals.

The aim of this study was to explore and investigate how selected mathematics teachers employ visualisation as a teaching approach to re-contextualise indigenous knowledge (IK). The study set out to explore how conceptual understanding is enhanced by participation in an intervention programme. The use of visualisation is considered an important mediating and pedagogical tool in the mathematics classroom to enhance the mathematics learning of learners.

The research is informed by a socio-cultural theory of learning and is located within an interpretive paradigm. The study was conducted at four schools in the Oshana region of Namibia and involved four mathematics teachers who were purposefully selected due to their willingness to use visualisation-IK approaches in their teaching, based on their responses to the survey. The methodologies used are qualitative and quantitative case study. To gather data, document analysis, a survey, lesson observations and focus group interviews were used.