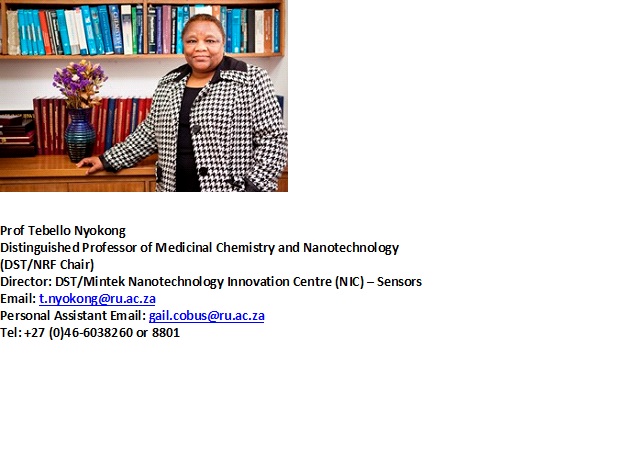 BSc    Chemistry and Biology, with Concurrent Certificate in Education, University of Lesotho, 1977.

4.    Adjunct professor of chemistry at University of Tromsø in Norway- from 2008

5. Included in the National Center for Research on Human Evolution (CENIEH), located in Burgos, Spain to be one of their "13 NAMES TO CHANGE THE WORLD” - 2012

8. Invited by Irina Bokova, Director-General of UNESCO, to be a member of the UNESCO High-level panel on Science, Technology and Innovation for sustainable Development, June 2011

9. International Conference on Frontiers of Polymers and Advanced Materiel (ICFPAM) award in memory of the centenary of the first Nobel Prize in Chemistry awarded to a woman: Marie Curie. And also this is the year of Chemistry, 26th May 2011.

10. Inducted by Vodacom Lesotho into the Lesotho Hall of Fame, 2010

12. Awarded Doctor of Science Honoris Causa by University of South Africa, 11th May, 2010

14. Awarded NRF President’s award as Champion for the transformation in research – 2009.

17. September, 2009, a motion was passed in the National Assembly acknowledging her role in transformation of science in South Africa. Subsequently she addressed the Parliament Portfolio Committee on Science.

18. Recognized as one of the top three publishing scientists in South Africa for 2007.

20. Awarded Research chair for Medicinal Chemistry and Nanotechnology by the Department of Science and Technology and the National Research Foundation, starting 2007.

21. Bestowed with the Order of Mapungubwe: Bronze by the State President Mbeki -2005.

23. Chosen as Rhodes University Rhodes Women of the Year in the Senior Research category, 2006.

24. Winner of SABC2/Shorprite-Checkers Woman of the year 2004 in Science and Technology.

26. Selected by Department of Science and Technology to present the Frances Ames Lecture, 2004.

28. Elected Fellow of the Royal Society of South Africa (FRSSA).

29. Member of the Academy of Science of South Africa.

MEMBERSHIP TO BOARDS/COUNCILS of ORGANIZATIONS:

3.    Jury Member for the L'Oreal/UNESCO Regional Fellowships for Women in Science in Sub-Saharan Africa -2011

6.    Board of the "Women in Science and Technology in Africa Network", an organization which is sponsored by the Rockefeller Foundation and UNESCO -1995-2000. Still continue mentoring women even though the funding ended.

2.    South African Representative: Society of Porphyrins and Phthalocyanines based in France.

1.    Invited to assist in the selection of the Associate Professor of Chemistry, University of Venda, Feb., 1997.

2.    A member of the Water Research Commission Steering Committee reviewing the University of the Western Cape Project on Desalination and Disinfection of Water, 1998-2001

3.    A member of the Foundation for Research Development (FRD) panel for monitoring FRD/Industry programs at  Port Elizabeth Technikon, 1998.

4.    A member of the advisory board: International Conference and exhibition on Integrated Environmental Management in South Africa, held Feb. 1998. This conference was a joint effort between Germany and South Africa.

6.    A member of the South SOUTH AFRICAN REFERENCE GROUP ON WOMEN IN SCIENCE AND TECHNOLOGY, a group under the Department of Science and Technology –2003.

7.    Appointed by the Minister of Science and Technology to be a member of the panel to select members of council for the South African Council for Natural Scientific Professions (April, 2004).

8.    A member of the advisory Board for the XVIII International Symposium on Bioelectrochemistry and Bioenergetics (19-24 June, 2005, Coimbra, Portugal.