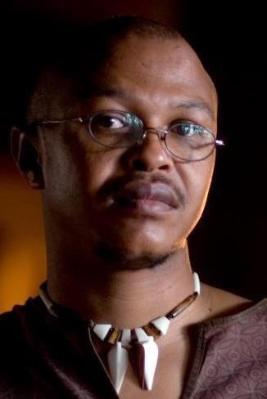 Churchill Madikida was born in the Eastern Cape and obtained his BA (FA) at the University of the Witwatersrand, Johannesburg in 2001. In 2001, Churchill was selected to participate in a four-month cultural exchange programme between two international tertiary institutions (University of the Witwatersrand and Umea Academy in Sweden). In 2002 he was again selected to participate in two international projects: a six weeks Art Residency Programme in Norway and an internship in Museum Curatorship at the Musee de Arts de Afrique de Oceanie in Paris (France). In 2001 and he practiced as an Assistant Curator for The Goodman Gallery. In 2003 Ochre Media appointed him as Collections Curator for Constitution Hill. His responsibilities included: research, sourcing out, archiving of artifacts, documents and photographs related to the history of the site. He was also involved in the coordination of workshops with ex-prisoners to collect oral histories and the manufacturing of artifacts that are used in exhibitions at the Constitution Hill Museum. Madikida was one of the Selectors for the 2004 Brett Kebble Art Awards, and was included as Curator and artist on the major group exhibition Personal affects: power and poetics in contemporary South African art, at the Museum for African Art and the Cathedral of St John the Divine in New York (2004), traveling to The Contemporary Museum, Honolulu, in 2006. He co-Curated, many other exhibitions like; Mapping Memory, Constitution Hill, 2006, Gandhi in South Africa, Constitution Hill, 2006. He has worked as an art facilitator, facilitating workshops like; The Memory Box Project, Baragwanath Hospital, 2006. He recently worked as the Outreach Officer for Spier Contemporary; he was responsible for managing an artist’s in-residency in partnership with the department of Fine Arts at the University of Fort Hare. In 2008 he was appointed to manage and curate the Sasol Art Collection. His art has been exhibited both locally and internationally with his first solo art exhibition, Liminal States, at the Johannesburg Art Gallery in 2003, and his second, Interminable Limbo, at Michael Stevenson in 2004. In 2006 he showed on Olvida Quien Soy - Erase me from who I am at the Centro Atlantico de Arte Moderno in Las Palmas de Gran Canaria, and was selected for the 7th edition of Dak'Art, the Dakar Biennale and in 2007 for the prestigious Dokumenta art exhibition in Germany. In 2003 he was the joint winner of the Tollman Award for a young artist, and in 2006 was named the Standard Bank Young Artist of the year. In 2013, Churchill joined the academic staff of the Walter Sisulu University as an Art Theory and Printmaking Lecturer, and he is currently pursuing a MA degree in Art History at Rhodes University. His MA supervisor is Prof Ruth Simbao.