Sun City and Child Welfare ran a combined Family Maths Event on Saturday 9th May at the Sun City Centre. Fabulous to see so many voluneers, children and families enjoying maths in the sunshine. Photos on our Facebook page

The SMDCC hosted their 4th Family Maths Event. Once again, many children and their families came to enjoy a fun few hours doing maths.

On 21st February, the Lebone Centre organised and hosted their first family maths event. Staff from the other Grahamstown Day Care Centres (such as Child Welfare, SMDCC and The Assumption Convent) and members of the SANC project team volunteered to assit at the event and about 14 families participated in the event, with children ranging from pre-schoolers upwards. Lebone organised the event so that learners from the varying age-groups could participate at their level, so they had activities for pre-schoolers (4-6 years old), others for learners aged 6-9 years and finally others for an older group (10 years and upwards). Prizes were awarded for the top scoring teams, for participation in the event and certificates were given to each family. Sarah Williams showed the families maths games that can be played at home using cards and dice and each family went home with a pack of cards and 2 dice.

The development centre hosted their 3rd Family Maths Event. This time volunteers were drawn from the Lebone Centre, the Rhodes Education Department and the SANC project. Two venues were set up to cater for a younger group of learners (up to grade 2) and older learners.

For Heritage Day yesterday St Mary's School with the SANCP team hosted a Family Maths Event for their Grade 3 learners and parents. It was such a fun day and there were over 100 people at the event. NICLE teachers assisted at the event, the Soul Buddyz club also helped. The SANC project co-ordinated the activities and provided snacks and prizes. What a fantastic community effort - a huge thank you to parents, learners, the school, teachers, project members and other invited guests for making this such a successful day.

After the success of our first family event in August, the staff at St Mary's Development and Care Centre in Grahamstown asked us to run another event last Saturday (2nd November). We had a great turnout, with new families attending who did not come to the first event. All family groups completed 12 mathematical actvities and the top scoring teams were awarded prizes.

As before, we had a contingent of students from St Andews College assisting at the stations but this time we had students from Kingswood College as well. Well done and thank you to all the students who gave up their time to volunteer for this.

Approximately 120 children and caregivers attended this event and competed in ‘family’ groups moving through mathematical problem solving stations. Afterwards caregivers were provided with ideas for developing learner resilience and independence and some oral and dice games. Photos are available in the Gallery

Prof Graven spoke at a parent session at a SANC Project school on how to support learners with developing numeracy. Approximately 110 parents attended the event and they were provided ideas for developing learner resilience and independence and some oral and dice games. A transcript of her talk: 2013 May Graven OP Parents talk.

Steve Sherman of Living Maths hosted a family maths event open to the Grahamstown community. 120 parents and children from across the spectrum of schools attended the event. Families were given a range of challenging problems involving ‘out the box’ thinking to solve in the form of a worksheet. 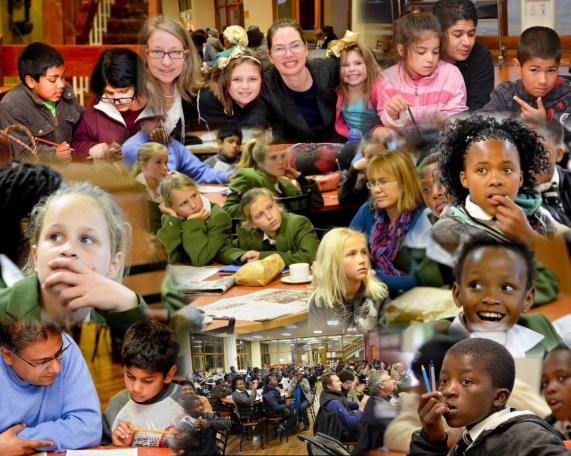