Sorry there was an error sending your form.
Giving to RU
Rhodes>Zoology and Entomology>People>Masters Students>Clarke 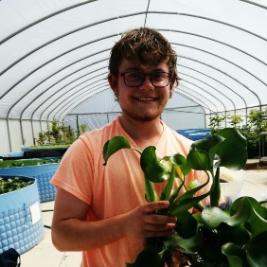 Clarke completed his undergraduate degree at Rhodes in 2016, and continued with an Honours degree in Entomology in 2017.  His Honours projects focused on the control of water hyacinth (Eichhornia crassipes) under oligo-and eutrophic nutrient conditions using different insect feeding guilds as agents, as well as an assessment of the sterile insect technique (SIT) used for the control of the false codling moth (Thaumatotibia leucotreta).  He aimed to determine whether a uni-or bisexual sterile release was more effective at reducing the egg viability of this agricultural pest, as well as to assess the mating dynamics between wild and sterile individuals.

His Masters will focus on the biological control of Cactaceous weeds in South Africa, with a particular emphasis on the genetic relationships within the Dactylopius genus (the ‘cochineal’ bugs).