Sorry there was an error sending your form.
Giving to RU
Rhodes>Zoology and Entomology>People>Masters Students>Daniel Rogers 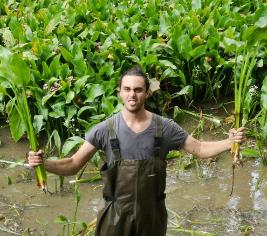 Daniel is a Grahamstown local who initially became attracted to biocontrol through an internship programme he completed at Rhodes University while still in high school. Since his decision to study entomology in his second year of university, his enthusiasm and interest in biocontrol have only grown. Daniel will be working on a relatively new invasive plant in South Africa, commonly known as delta arrowhead, and will be surveying various populations of the plant around the country. He will also be running various tests on a potential biocontrol agent, Listronotus frontalis, to determine its suitability to control this invasive plant in South Africa. He hopes to use his experienced gained through his studies to help South African communities who are dealing with water shortages caused by invasive plants.

My mindset going into my MSc degree is best captured by this quote by Michael Scott, from the TV series The Office:

“I know exactly what to do. But in a much more real sense, I have no idea what to do”