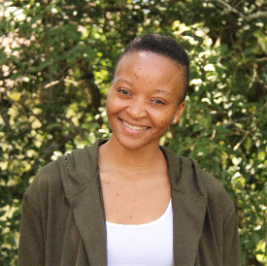 Thesis title: The ecology of urban rivers, what are the drivers of change: Case study of the Eastern Cape river systems.

Getrude Tshithukhe completed her BSc (Hons) degree at the University of Venda in 2016. Her research focused on diatoms as screening tools and assessed the trophic status of water in the Xikundu Weir, Luvuvhu River in the Vhembe District, Limpopo Province. She is currently a Masters student whose study aims at investigating how the composition of aquatic flora and fauna changes in response to urban land use and determining which biological indicators/indices best reflect the disturbance, it will further investigate the use of aquatic weeds (Eichhornia crassipes and salvinia molesta) as bio-accumulators of metals. Her research will provide specific biological indicators for different pollution source in urban environment and further add to our knowledge the use of traits and stable isotopes analysis as an alternative early warning detection techniques, prior freshwater eutrophication.