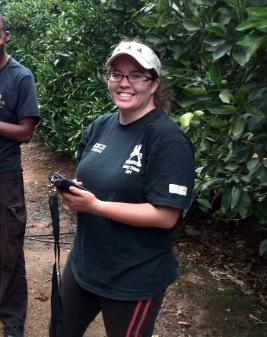 The use of entomopathogenic fungi to control the soil-borne life stages of false codling moth.

Candice completed her MSc at Rhodes University in 2012. Her current research focusses on the use of entomopathogenic (ento = insect; pathogenic = disease-causing) biological control agents against the soil-dwelling life stages of false codling moth (FCM), an important pest of citrus in South Africa. Not only does FCM damage fruit, but because it is found only in South Africa, foreign export markets will reject entire shipments of citrus in the presence of one moth. Since 70% of citrus in South Africa is exported, its successful control is crucial. Recently there has been a shift towards the use of more environmentally friendly control options against FCM, however these options have largely failed to investigate the control of FCM at the soil-inhabiting life stage. Entomopathogenic fungi are common occupants of the soil environment and thus an opportunity becomes available for an alternate method of control. Ultimately she hopes that these fungi can be used within an integrated pest management scheme to provide more effective control of the pest in an environmentally friendly manner.