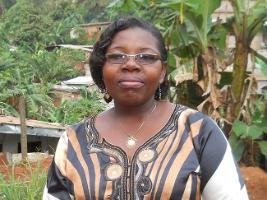 Msc University of Yaounde I, Cameroon (2009)

Biotic and abiotic factors promoting the development and proliferation of water hyacinth in the Wouri-Basin (Douala-Cameroon), with impacts for its biological control.

Sonia completed her MSc at University of Yaoundé, Cameroon in 2009. Her current project focusses on the influence of biotic and abiotic factors promoting the growth and development of water hyacinth, Eichhornia crassipes, in the city of Douala (Cameroon). Introduced to the shores of Lake Chad, water hyacinth was first recorded in 1992 and has spread gradually along the coastal areas of Cameroon in general, and Douala in particular. It is now considered the main pest species of aquatic environments by local communities. Sonia hopes to assess the impacts that biological control of water hyacinth might have at Cameroonian field sites (as biological control has not yet been attempted in Cameroon) and in particular she aims to evaluate the potential impact of fungal pathogens on water hyacinth.