Sorry there was an error sending your form.
Giving to RU
Rhodes>Arts of Africa >Exhibitions & Performances>CONSUMING US TOMORROWS/TODAY SPECIAL PROJECT AND COMPETITION 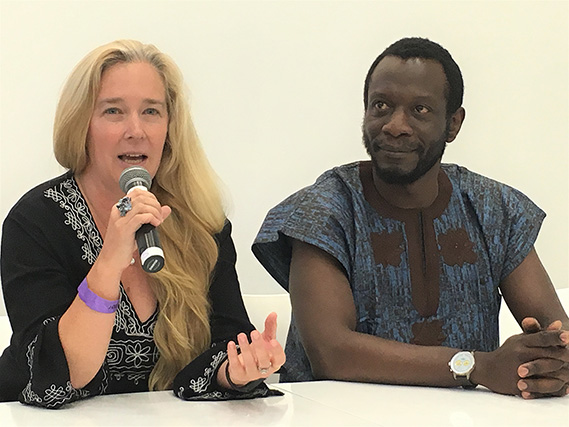 Ruth Simbao and Azu Nwagbogu at the Tomorrows/Today Press Conference, 2016 ‘Africa’ and consumption in a vertiginous world

We live in a world that demands high speed. Frequently we find ourselves racing from one project to another, one idea to another, and one event to another. Haste seems to increase consumption, both in terms of what we consume and the ideas and things that consume us. It’s as if time eats us up. An array of sometimes-pseudo choices swallows us, and the fundamentals of desire, appetite and death, at times, engulf us.

Yet it is more than the momentous that tends to consume artists – it’s also the poetic, the sometimes obscure, and the small but poignant points that gnaw away at creative souls. Consumption, in all aspects of the word, is profoundly present in our contemporary lives.

CONSUMING US provides a platform for eight artists who are related, in their individual ways, to the African continent to speak about the ideas and concerns – whether small, large, positive, negative, tangled or in-between – that consume them.

The title, CONSUMING US, invites thoughtful contemplation of our ways of consuming and being consumed as a human species, as a society, as art lovers and as individuals, particularly in the context of a commercial art fair.

In recent decades, contemporary art related to Africa and the African diaspora has become increasingly trendy on the international art market, and it is important to grapple with what this might mean for artists, for creative processes, and for the consumption of art and 'Africa'.

The artworld has, on many occasions, represented ‘Africa’ in an outmoded way – as static, shallow and singular despite the multifarious complexities of the continent. In a contemporary context of economic neoliberalism, it is critical to keep dialogue as open as possible when talking about art and the African continent, and to constantly question whether ‘Africa’ is being used as a facile marketing tool. Artists associated with the African continent produce a vast array of work that is complex, questioning and open-ended, often deliberately resisting the consumption of their work as ‘African’. Consequently, as we contemplate tomorrow's today in relation to art and the continent of Africa (particularly in the context of a commercial art fair), it is imperative to be attuned to the diverse ideas that are consuming artists today.

The strengths and interests of these eight artists are, indeed, diverse, and it is precisely the broadness of their aesthetic and conceptual scope that enables us to imagine an unbounded tomorrow.

THANIA PETERSEN explores her royal Indonesian lineage as a way of focusing on the strength and spiritual power that enabled members of her Cape Muslim community to withstand the oppression of the apartheid system. Reflecting on the ability to move inwards rather than be consumed by exterior forces that label and stereotype groups of people, her work reflects upon what is retained rather than what is lost.

“My film deals with the all-consuming love for the divine and how it has carried us through all our trials and tribulations. When we felt lost, it guided us inward to discover an abstract universe which cocooned us and covered us, kept us dry and protected our minds and hearts from becoming weak. When everything around us seemed to be drowning, we remained strong. Each cloth represents a different Sufi order” (Petersen). MATHIAS CHIROMBO similarly engages with the spiritual world. His series of predominantly blue paintings, which is informed by the death of his father, alludes to emotional intensity associated with deep waters. In these works he contemplates the experience of crossing over from the realm of the living to the world of the dead, and from human to spirit form. Expended by the pain of loss, Chirombo mourns through these works by reaching towards the power and wisdom of those who have come before and who continue to communicate.

Inter-generational dialogue is central to REHEMA CHACHAGE’S Mshanga/Orupa Mchikirwa installation. The work refers to her great-grandmother, Orupa Mchikirwa, who would wrap mshanga (layers of cloth including cutout pieces of an old rug and an old khanga) around her waist to fight off the gnawing feeling of being consumed by hunger.

“The concept behind ‘Mshanga’ is simple really – the stomach, for our bodies, is the center of equilibrium, and normally loosens up when we are hungry. So, in order to retain strength (when hungry), it helps to have it tightly and securely tied. Traditionally, in Tanzania, women tie ‘Mshanga’ (as ritual) around their tummies when they are bereaved.

Untitled (Whirl) “works with the idea of a spin at three levels – spinning out of control (the failure to keep it together), spinning for meditation (to regain the state of total calmness like in Sufism), and the spinning motion of the ‘Mshanga’ around the waist to protect this starving woman who has to keep it together for the survival of her family” (Chachage). LADY SKOLLIE’S work focuses on ways that we consume sex and women’s bodies in what she calls the ‘year of the booty’. Contrasting willing and unwilling consumption, conscious self-exposure and the violent display of others, she grapples with her

“…fears and preconceived notions of being a woman of colour in a place as politically wonky and confusing as South Africa. Concepts of desire, lust and unreciprocated love” (Lady Skollie). 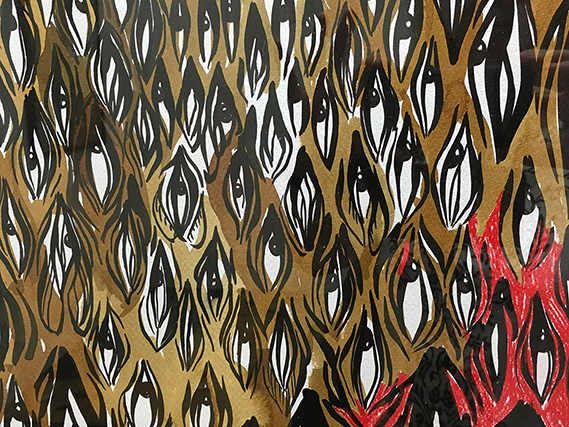 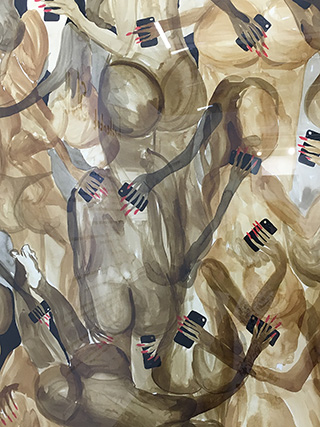 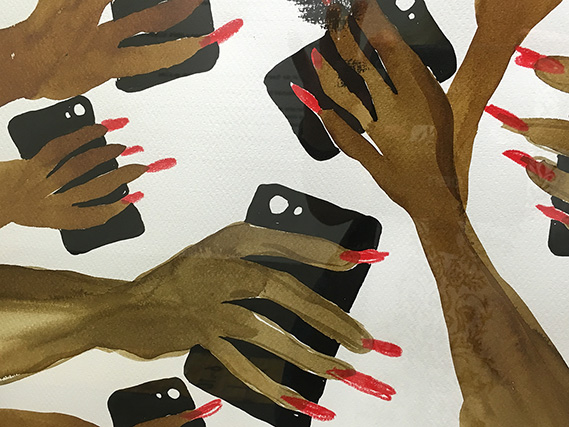 GRESHAM TAPIWA NYAUDE’S paintings focus, in part, on the consumption of media and its impact on portrayals of Africans. Edgy and often satirical his work explores themes of leadership (particularly in the context of Zimbabwe), hypocrisy, falsehood and other forms of learnt survival tactics in which the ‘lie’ often consumes the self. Nyaude plays with the notion of ‘zino irema’, which means “‘the tooth is a fool’ – because Madzimbabwe say ‘it unwittingly smiles even on him whom he does not like’” (Chikowero. 2015. African music, power, and being in colonial Zimbabwe). 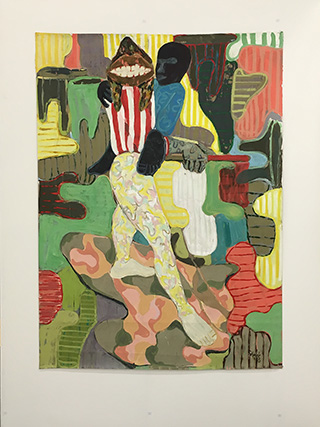 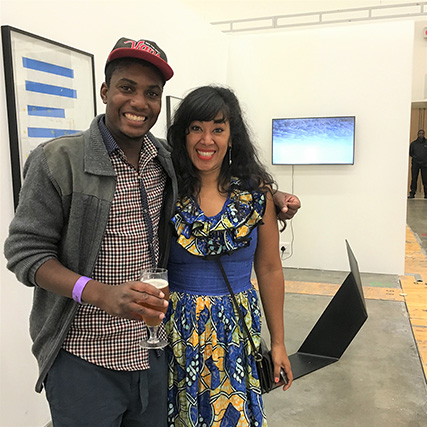 While Nyaude’s paintings grapple robustly with tactics of survival in times of socio-economic turmoil and unsteadiness, KYLE MORLAND’S practice draws on apparent precision in order to explore the possibility of grounding oneself in a rapid, vertiginous world. However, the exactness of the angles and measurements of his industrial-like sculptures and drawings is quietly whimsical. Subtly alluding to uncertainty despite the appearance of extreme meticulousness, Morland’s work raises questions about our understandings of certitude: When is the scrupulously set angle of a sculpture correct or mistaken? When does something topple from ‘enough’ to ‘surplus’? 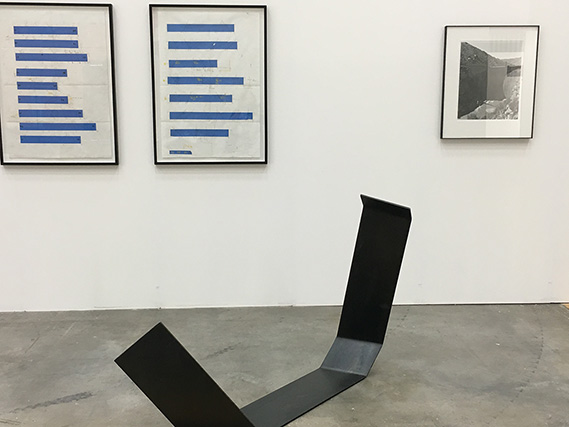 RUBY ONYINYECHI AMANZE’S drawings and video projections portray space as a playful and liberating concept that can be picked up, folded, or carried along. Drawing loosely from stories, popular culture, art history and memory, she imaginatively creates characters that evolve, slip and transmute, not as outlandish, out-of-the-norm beings, but as characters that participate in the everydayness of change.

“In this space, creatures find authenticity, wholeness and freedom in their ability to simultaneously belong nowhere and everywhere. In this world, they play” (Amanze).

While Amanze portrays space as a character, MASIMBA HWATI teases out the personalities of objects and is fascinated with the ways that ideas become attached to them – sometimes meaningfully and at times arbitrarily. Deliberately switching contexts, he questions the ways that ‘things’ become consumed by ‘ideas’. Interrogating postcoloniality, he utilises the multiple personalities of objects to raise questions about knowledge systems of the past and our interpretations of them today and in the future. In the installation Don’t worry, be happy Hwati contemplates Africa’s relationship to the rest of the world.

“The concept of the wheelbarrow-table suggests the absurdity of definition, containment and homogenization of the African content, space and culture” (Hwati).

The winner of the 2016 competition was Masimba Hwati 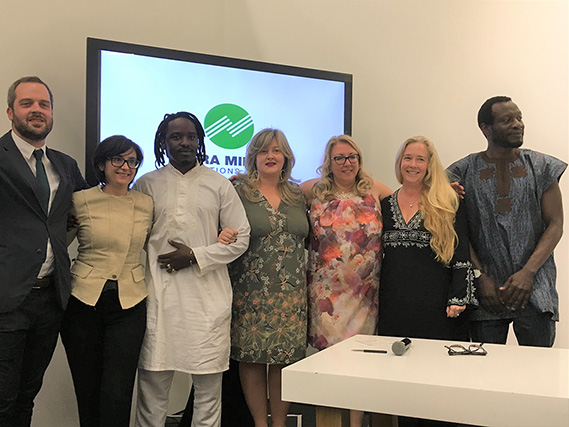 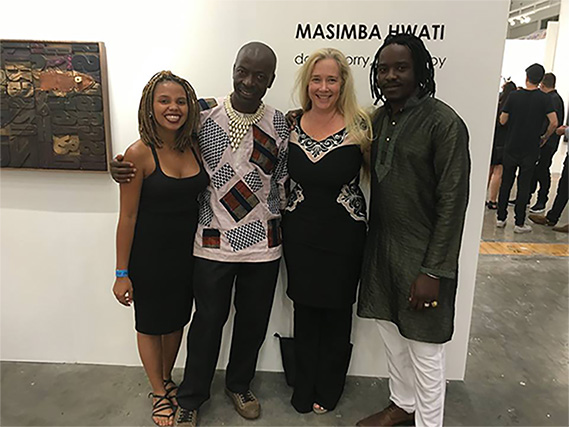