Sorry there was an error sending your form.
Giving to RU
Rhodes>Arts of Africa >Exhibitions & Performances>FROM CHINA WITH LOVE

FROM CHINA WITH LOVE 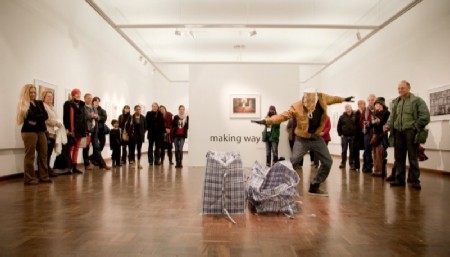 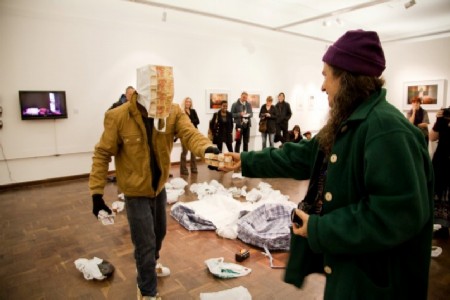 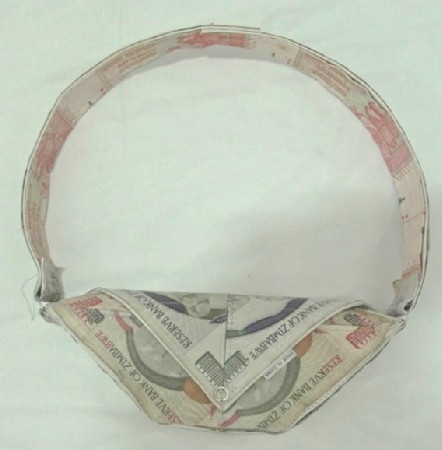 In this performance, Gerald Machona explored China’s rise as a new superpower, its complex history of trade and its new economic ties with many African nations. In line with his broader use of decommissioned dollars as an aesthetic medium, he carefully stitched together three-dimensional objects, such as a wallet, a watch, a pair of sunglasses and a bag out of decommissioned Zimbabwean dollars and stitched a label on them that read ‘Made in China’. He then bartered with the audience in a playful process of exchange, expecting them to, for example, sing a national anthem in order to obtain one his beautifully made objects.

Through this work, Machona raised important questions about labour, consumerism and current global socio-economic shifts, as well as Zimbabwe’s ‘Look East’ policy and its relationship to China. Referencing what is known in Zimbabwe as zhing zhong and in South Africa as fong kong (slang terms meaning fake, cheap, or low quality goods associated with Chinese imports) Machona contrasts carefully produced hand-made objects that have value as ‘art objects’ – even though the dollars they are made out of are valueless – to mass-produced products that in Zimbabwe are seen to be killing the informal business of handmade craft objects.

Jokes about fong kong objects tend to stereotype and over-simplify relationships between Chinese and African people. “In 1998 the term [fong kong] was made popular in South Africa by the Hunger Boyz kwaito song titled Fong Kong, which was a direct critique of low-quality Chinese imports that were perceived to be ?ooding the local market. As singer Senyaka says, ‘We wrote this song as a protest against what the Chinese were doing to the black man’ (Sosibo 2010). Today, some fans acknowledge that the lyrics of the catchy tune were somewhat o?ensive, but negative stereotypes of Chinese people in Africa persist… In some parts of Africa the removal of natural resources by Chinese companies is derogatorily referred to as the ‘Great Chinese Takeout’” (Simbao 2012).

In her essay, ‘The Sensitive Nature of Its Materials: A Reflection on China-Africa’, Tu Huynh (2012:50) writes,

Regardless of the real, imagined, or hearsay presence of Chinese people in any particular place in South Africa, opinions about them are manifold. The gamut of opinions available in the streets includes: the availability of cheap Chinese goods allows (poor) people to consume things that they otherwise would not have been able to afford, Chinese businesses create employment opportunities, Chinese entrepreneurs exploit local people by paying low wages and selling low-quality goods that are not durable, Chinese businesses are taking economic opportunities away from locals, and Chinese people are kung-fu fighters. With the exception of the last stereotype, which is influenced by an explosion of Bruce Lee and Chinese (Hong Kong) martial arts films in South Africa in the 1990s, the opinions are mostly formulated around economic activities like consumption and employment. Moreover, they contradict one another as well as affirm and conflate with views about China’s present influence in Africa that are expressed by the Western media, local policy elites, political and economic analysts, unions, and civil society. Whether the opinions are positive or critical, what has at times been neglected is that linguistic differences, cultural particularities, and long-lasting stereotypes generated by the West have contributed to half-perceptions that have come to represent the whole country of China, so massive and so culturally embellished, and the people.

Revealing complex relationships between Chinese and African people that move beyond surface-level quips about zhing zhong or fong kong, Machona collaborated with Chinyanta Mwenya who begins the performance by wheeling Machona, (who is hidden inside a ‘Ghana-must-go’ bag) into the gallery. Mwenya, a Zambian student based in South Africa, spent a significant amount of time in China where he learnt Mandarin, and in the performance he casually spoke with the audience in fluent Mandarin, as if expecting them to understand what he was saying.

In analyses of current global socio-economic shifts and revived China-Africa relations, it is imperative to acknowledge that these shifts have resulted not only in Chinese objects pouring into Africa and elsewhere, but also in many Africans seeking opportunities for informal trade in places such as Guangzhou. Sometimes referred to as the 'world's factory', Guangzhou is host to numerous Africans, mostly in the trading areas of San Yuan Li and Xiaobei Lu, where streets are ‘lined with multi-floored commercial buildings teeming with tiny shops that sell cheap goods that range from electronics, to fabrics to wigs’ (Simbao 2011: 17). It is important to recognise that xenophobia exists on both sides of the China-Africa debate. While the fong kong hype has negatively stereotyped Chinese people, in Guangzhou the media sometimes refers to the 'African problem'. As Li Zhigang suggests, the mistrust is mutual (Simbao 2011: 18).

Alluding to complexity of the China-Africa debate in which Chinese people stereotype Africans and Africans stereotype Chinese people, yet on-the-ground meaningful relationships also develop, Machona produced the work ‘If you travel east far enough you end up in the west and if you go far enough west you end up in the east’ (below). This Nike shoe is hand stitched from decommissioned Zimbabwean dollars, USA dollars, and Chinese RMB. 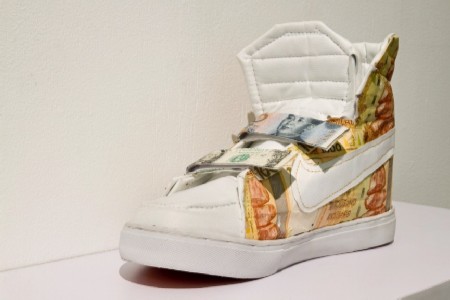 Huynh, Tu. 2012. "The Sensitive Nature of Its Materials: A Reflection on China-Africa". In Making Way exhibition catalogue.