Sorry there was an error sending your form.
Giving to RU
Rhodes>Arts of Africa >Exhibitions & Performances>INTERSECTION

Guest artist for the Arts Lounge run by the Visual and Performing Arts of Africa research team, National Arts Festival

In July 2011 the Visual and Performing Arts of Africa research team invited Maurice Mbikayi to Grahamstown to participate in the Arts Lounge as a guest artist. Mbikayi produced the public performance, Intersection, on the streets of Grahamstown. Bandaged from head to toe, he rode on horseback from the Arts Lounge on Somerset Street (near the Rhodes University campus), down High Street and around Church Square (a site sometimes associated with political protest), and up New Street.

Mbikayi is a Cape Town-based artist who came to South Africa in 2004 from the Democratic Republic of Congo where he studied at the Academies des Beaux Arts. Based on the performance Voices (2010) at the Parade in Cape Town, Intersection alluded to potential vulnerability associated with being a ‘foreign national’ from another African country in the context of Afrophobia in South Africa. In Intersection, he engaged with people on the streets of Grahamstown, handing out Post-it notes that read ‘You are under arrest’, ‘Follow me’, ‘Are you wounded?’ or ‘Are you at home?’ and he used his own bandages to ‘arrest’ passers-by and bind their wrists. 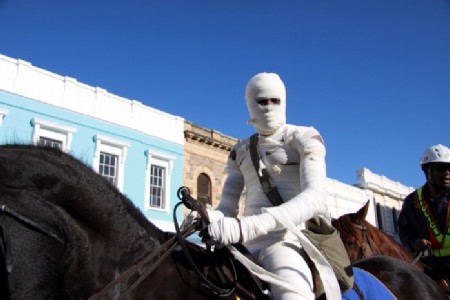 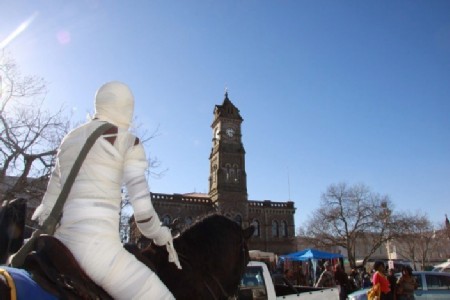 In the process of securing a horse for the performance, Mbikayi found the local police to be very obliging, but they also insisted on escorting Mbikayi through town. One of the police officers willingly wore a gas mask (a symbol of danger that indicates the need for protection) as she assisted in handing out Mbikayi’s messages to people on the street. The ambiguity between the police accompanying Mbikayi in order to support his performance and them escorting him in order to monitor his behavior, alludes to the tensions between police who are supposed to (and sometimes do) protect, but might perpetuate the criminalisation of ‘foreign nationals’.

As Neocosmos (2010:89) suggests, while “migrants are rarely convicted of any crimes whatsoever by a law of court”, they face “systematic xenophobia, particularly from the police [and] Home Affairs officials…[in] the form of arbitrary exercise of power, corruption, extortion, and gratuitous violence and torture…”. Similarly, Hein Marais (2008:10) argues that, “The institutionalised denigration of refugees and the routine rounding-up of foreigners in ‘anti-crime’ sweeps have helped amplify the common slur that they’re thieves, imposters—and legitimate targets. The pillaging that has accompanied the most recent attacks [in 2008] is an amplified echo of the extortion and shakedowns many foreigners experience at the hands of the South African authorities, including the police”. “What would it mean for police to arrest perpetrators for attacking the very ‘foreigners’ whom the police had previously helped to stigmatise as criminals?” (Worby, Hassim and Kupe 2008:23).

Attempting to draw a complex picture of the paradoxically violent but at times intimate relationship between police and civilians, Julia Hornberger (2008:133-134) discusses the seemingly incongruous fact that many victims of xenophobic violence during the 2008 attacks in fact ran to police stations for protection.  While this points to their “terrible fate and desperation: having to seek protection from those who abuse them, facing a terrible choice between two evils”, the amazing thing, she says, “was that the police took up the challenge. They opened their gates and let the refugees in and let them stay” (Hornberger 2008:134). 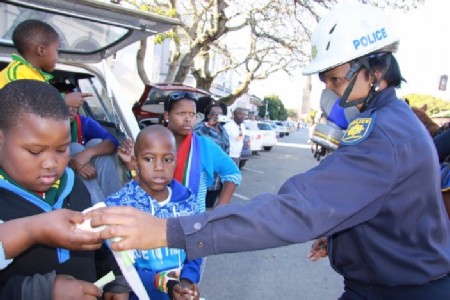 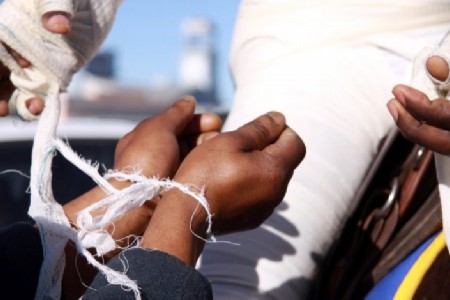