Sorry there was an error sending your form.
Giving to RU
Rhodes>Arts of Africa >Exhibitions & Performances>Inzwi! 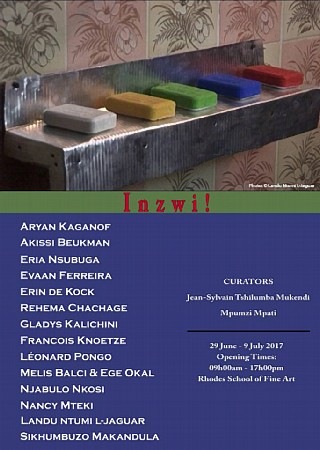 Inzwi! was an art event during the 2017 National Arts Festival in Grahamstown that celebrated the 5th anniversary of the Lucid Lunchbox, a student-led series of talks linked to the Arts of Africa and Global Souths research programme at Rhodes University. During the festival, five sets composed of three videos interjected the talks presented by Dineo Seshee Bopape and Beth Diane Armstrong, as well as a conversation between Andrew Tshabangu, Thembinkosi Goniwe and Philiswa Lila.

The event intended to trigger reflection and dialogue, through a ‘wake-up call’ to grapple with our collective heritage and struggles, our fears and points of departure in order to envision futures. The selection of videos drew from the work of Rhodes Fine Art students, Alumni and Artists in Residence. Works on display addressed matters of identity (social, political and/or fictional); social engagement and activism; religious and spiritual practices in African contexts; race and white supremacy; and, finally, patronising relations in the art world. Borrowing from the words of Weléla Mar Kindred, the choreography of this event, like others that have been propelling black body politics in recent movements, is one of "communal healing, strength and solidarity".