Sorry there was an error sending your form.
Giving to RU
Rhodes>Arts of Africa >Exhibitions & Performances>THE OTHER SIDE: CITYWALK

THE OTHER SIDE: CITYWALK 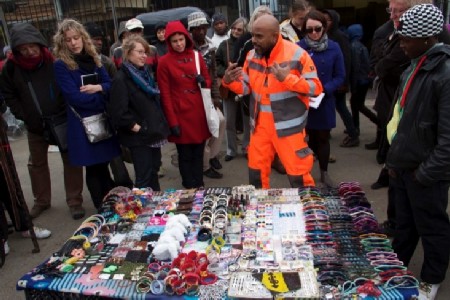 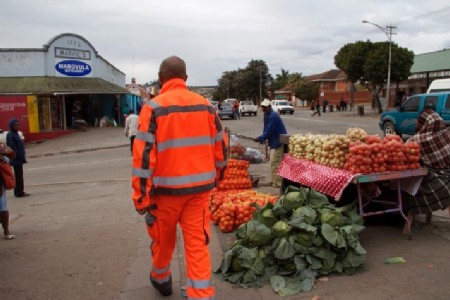 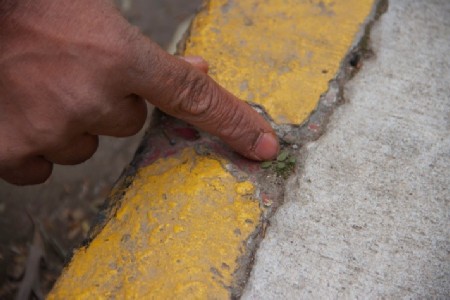 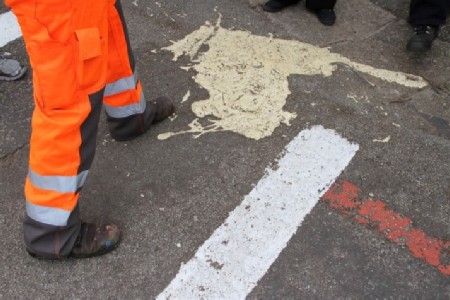 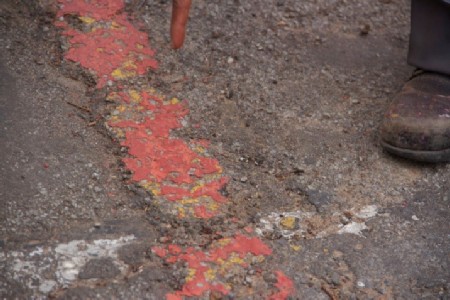 Short excerpt from ‘Walking The Other Side: Doung Anwar Jahangeer’ by Ruth Simbao in Third Text 27 (3):

“In 2000 Jahangeer conceptualised and implemented the City Walk initiative as a way of directly engaging with and observing the flux and mutability of his adopted city, Durban. The City Walk started “as a curious exploration into the informal infrastructures that evolve naturally in response to the needs of the majority”. [6] During these performances he leads his audience, which consists of both a formal art audience and informal passers by, through the city by foot. As he walks, he talks in detail about space and place, about physical pathways and their surrounds. Through animated conversation and through his own bodily engagement with space, he focuses the participants’ attention on the ground, encouraging them to engage with the road in a corporeal way. The project now includes walks in Grahamstown, Durban, Johannesburg, London, Belo Horizonte, Addis Ababa, Malmo, Marseilles, Amsterdam and Copenhagen.

Referring to Michel de Certeau, Jahangeer asserts that people who do not walk in cities are merely voyeurs, reducing their experience of the city to vision as they view the city from behind the glass of car windows and high-rise buildings. In his chapter, ‘Walking the City’, de Certeau [11] argues that translation into visibility robs people of a certain richness that is experienced in the act of embodied walking, in the act of ‘composing a path’.  As such, there is a certain failure to seeing; an inevitable blindness comes into play when vision and experience are narrowed down to the eyes. [12] According to de Certeau [13] when systems attempt to ‘transform action into legibility’ such as through the production of maps, there are other ways of being in the world that are too easily forgotten. The walker, the person who makes his or her way on the street, he says, taps into life in such a grounded, bottom-up way that a certain type of metaphoric blindness becomes privilege, rather than handicap:

The ordinary practitioners of the city live 'down below', below the threshold at which visibility begins. They walk—an elementary form of this experience of the city; they are walkers, Wandersmänner, whose bodies follow the thicks and thins of an urban 'text'… These practitioners make use of spaces that cannot be seen; their knowledge of them is as blind as that of lovers in each others' arms. The paths that correspond in this intertwining, unrecognized poem in which each body is an element signed by many others, elude legibility. It is as though the practices organizing a bustling city were characterized by their blindness… Escaping the imaginary totalizations produced by the eye, the everyday has a certain strangeness that does not surface, or whose surface is only its upper limit, outlining itself against the visible. [14]

In many ways one can read Jahangeer’s City Walk performances as a response to blindness, or at least as a way of challenging our blind spots with regard to the spaces around us, particularly spaces still marred by the laws of Apartheid. He encourages his participants to read between the lines of road markings, cracks in the tar, signposts, and a palimpsest of tar, dirt and discarded objects that indicate the lurking presence of feet gone by.

For the Making Way exhibition Jahangeer produced a new City Walk titled The Other Side (2012), which explored the stark economic divide that continues to plague the small city of Grahamstown in the Eastern Cape. He began the walk near the Rhodes University Drostdy Arch, and made his way along Beaufort Street which turns into what used to be Raglan Road and has recently been renamed Dr Jacob Zuma Drive. Grahamstown, in the heart of what is known as “Frontier Country” due to historic wars between the British Settlers and the local Xhosa residents, “has always been divided by race, class and apartheid spatiality”. [16] According to local activists from the Unemployed Peoples’ Movement, “away from the tree-lined avenues of Rhodes University and the middle-class town centre, unemployment in the townships stands at between 70% and 80%. The roads are crater-filled and low-cost government houses in areas such as Vukani are falling apart. Electricity, water and sanitation are often a luxury”. [17]

Leading his audience from the privileged town centre towards the township, Jahangeer points to cultural shifts along the way, observing how borders are erected, how signposts are framed and how the presence of walkers literally become enmeshed in the ground.  A defunct security sign is painted over with flowers; an advert seeking “immigrant Africans” for a Brett Bailey production is plastered onto a wall; metal tabs for opening tins of Coke are deeply embedded in the tar; vegetables overflow onto the pavement, and paint-spills creatively confuse the rigidity of red and white lines that demarcate the rules of the road. While attempts to order space (and people) through various markings become jumbled by slippages and spills, informal trade is at times remarkably ordered and precise. Leaning over the table of a street vendor who each day lines up his plastic earrings, bracelets, wallets, nail varnish and hairclips, Jahangeer points out the grid-like structure of a well-planned city reflected in the rows of colourful wares. Expectations are reversed as overlaid signifiers of order dissolve into confusion and assumed informality is methodically arranged” (Simbao 2013).