Sorry there was an error sending your form.
Giving to RU
Rhodes>Arts of Africa >Exhibitions & Performances>UNBURYING HISTORIES 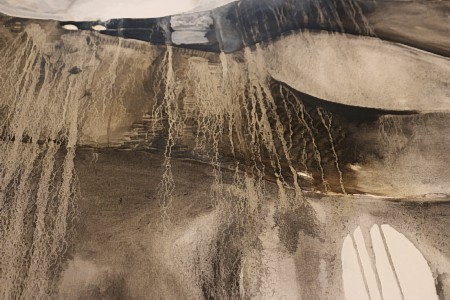 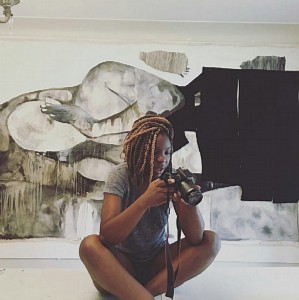 Zambian artist Gladys Kalichini and MFA student in the Arts of Africa and Global Souths research programme at Rhodes University, participated in an artist’s residency at The Fountainhead in Miami, Florida, where she worked with photographs and large paintings, exploring the deconstruction and reconstruction of women’s histories in Zambia.

The body of work produced during my residency at The Fountainhead analyses the marginalisation of the historical narratives of two Zambian women, Alice Lenshina (b.1920 – d.1978) and Julia Chikamoneka (b.1910 – d.1986), by exploring the representations of death and dead bodies. Both Lenshina and Chikamoneka were important figures during Zambia’s struggle for independence from British rule in the early 1960s, but in the official historical narrative of that struggle their presence and their roles were hardly recorded nor recognised.

Using different archival sources for my research (also included in my MFA), I focused on three main conceptual categories: (i) blanks and concealments in historical accounts, (ii) the fragility of the body (and of narratives) over time and (iii) erasures and modifications of narratives.

In producing this work I regarded the “erasure of memory” as the “death of memory”. Death as a metaphor for erasure was considered in relation to what happens to a body during and after death, as well as the activities that surround death or mourning. I worked on the concept of marginalised narratives as being in the process of being erased or dying.

My images represent the body (the corpse) and the processes it goes through after death, as well as the customs that surround death, such as the washing and preparation of the corpse at the mortuary.

The materials I have used are an integral part of the work. Whereas there are bodies drawn on the canvas, the canvases could also be viewed as bodies. In some works I incorporated other materials, such as black cloth and yarn, and in others the canvas was folded to mimic shrouds that would cover the body. It was interesting to see how the fabric added a subtle sculptural element to what is usually two-dimensional.

All the paintings were done with oil on canvas with a colour scheme that mimics the different shades, tints and tones of the archives, meant to create an ‘antiqueness’ to the work. I depicted drawings of dead bodies onto the canvas while treating actual canvases as another body of and for the representation of recovering erased memory. I also incorporated other materials, such as black cloth and yarn. In other works, the canvas is folded to imitate shrouds that would cover the body. 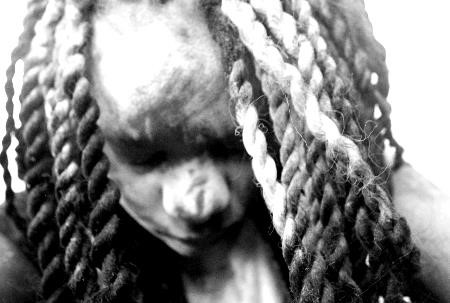 The photographic series is composed with images of myself performing/staging a Zambian burial custom, where some mourners are covered with a white powder (chinbuyaring).

When viewers interacted with the work while it was in progress and laid straight on tables, the question that arose was: “Which way is this work supposed to be viewed?”  I found the question interesting because the work is essentially bodies, and bodies can be viewed from different angles. For instance a mortician standing at the head of the body sees the corpse as an inverted image (upside down), and during the viewing of a body at a funeral, it is laid horizontally. And when being buried, it goes down presenting a bird's eye view. This says something about the way we really look at anything, history or narratives . . . we look at history from the victor's point of view, then we look at the not so victorious point of view; I looked at these narratives in the same way, sometimes highlighting the more intimate aspects of these women's lives as well as the broader picture. 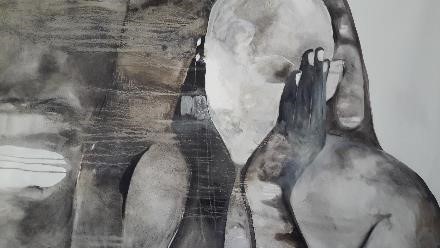 The viewers who experienced my works did so in two ways: first visually, and then narratively. They enter or begin the conversation about them visually. Given the sizes of the pieces it’s not easy to miss them. Most viewers found the work visually captivating, with a very strong presence. Most also found the work intriguing in that you can see death, not in a way that the work screams or scares, but rather in that it has a subtle yet strong presence.

The second way was when they heard what the work is about, or what narrative it refers to. The majority of the viewers did not know of the two Zambian women; about two or three knew a bit here and there. But after hearing the stories, the interest grew, and most could easily relate to the bigger picture of marginalised histories, and in particular of histories of women which have become invisible.

This is a revised version, the original article can be found at emergentartspace.org

Gladys Kalichini is a visual artist from Lusaka, Zambia. She graduated from the University of Lusaka, and she is now pursuing a Master of Fine Arts degree at Rhodes University, South Africa, where she is also a member of the SARChI research group and the Arts of Africa and Global Souths programme. Both her research and her art explore African colonial history, the marginalisation of women in historical narratives, and memory.

Photos: Courtesy of the artist