THE INTER-REGIONAL CONFERENCE/WORKSHOP OF APRIL 2019

Report by Dr Eyitayo Ijisakin, Rhodes AHP visiting Fellow in the Faculty of Humanities and hosted by Arts of Africa and Global Souths Research programme.

The Inter-Regional Conference/Workshop was organized by the National Institute for the Humanities and Social Sciences (NIHSS) for the Doctoral students of the universities in the Eastern and Western Capes of South Africa. The Conference brought together scholarship holders from Nelson Mandela University, Rhodes University, Stellenbosch University, University of Cape Town, University of Forte Hare, and University of the Western Cape. It was held at the Carmel Guest Farm, George, Western Cape, from Tuesday to Thursday, April 2-4, 2019. The participants were of different national identities.

The keynote speakers were Dr Nthabiseng Motsemme, the Academic Director of NIHSS; Prof. Lungisile Ntsebeza, NRF Chair and Director of the Centre for African Studies, University of Cape Town; and, Dr Nomalanga Mkhize, Department of Sociology and Anthropology, Nelson Mandela University. The mentors in charge of each sub-theme were Charlyn Dyers, Hennie Kotze, Kishore Raga, and Paul Maylam, while Fred Hendricks served as the roving mentor.

The Conference had three Keynote Speakers that handled a Plenary Session each of the three days that the conference was held. Dr Nthabiseng Motsemme in her lecture “Reflections on the next generation of NIHSS scholars” had an interactive session with the scholars on how to improve on the processes of getting funding, as well as the prospects of their research.

Prof. Lungisile Ntsebeza was the Keynote Speaker for the second day. In a lecture titled “Beyond Race: the role of engaged scholarship in revolutionizing the humanities”, Ntsebeza spoke on how race as a tool of analysis is insufficient to develop curriculum in humanities scholarship, he argues that though political power might have been in the hand of the “Black”, economic power remains with the “White”. He further states that intellectualism is about critical engagement in which intellectuals attempt to change the status quo of the society for the better. However, “you cannot change the world except you understand its context”. Ntsebeza classified intellectuals into three: Organic, traditional, and Neo-intellectuals. He further claims that “if revolution is defined as violent overthrow of a class by another, then the ANC is not a revolutionary order, because ANC did not overthrow the bourgeoisie, rather it seeks to join them”. Ntsebeza encouraged the emerging scholars not to be complacent intellectuals but to be active and engaging intellectuals. Prof Fred Hendricks who moderated the plenary session encouraged the scholars to challenge the status quo in which Africans have only contributed about 3% of the total global book production. Hence, Africans need to write about the African world, this is very apt and in tandem with the argument of Simbao et al (2017)[1] in “Reaching Sideways, Writing Our Ways: the Orientation of the Arts of Africa Discourse”.

The Plenary Session for the third day was handled by Dr Nomalanga Mkhize who spoke on “The triteness of knowing: University and scholarship in the internet age”. Mkhize is worried about the imbalance in PhD acquisition and knowledge production, as well as poor reading culture. She argues that course contents/outlines restrain students from engaging their intellectual reasoning as they are compelled to work/reason within the ambit of such course contents/outlines. Mkhize emphasized the need to make knowledge production transform our environment; hence, we must avoid “over production cum under consumption syndrome” in which research output of PhD scholars have little or no impact in transforming the society. Mkhize concluded that knowledge production should be critically engaging, and based on quality rather than quantity, especially nowadays that students are caught in the waves of internet and university-based knowledge production.

What was expected of participants?

Each participant was expected to have read at least two chapters/papers earlier assigned to them (as the advocate) with a view to bringing out the main argument of the paper; the best support for the argument; and what  could impede understanding, as well as how the paper could be improved. The author was initially given a very brief period to make a statement about his/her paper and was also given an opportunity to comment after the input of the advocates and the general discussion. The mentor guided the discussion and asked pertinent questions to encourage critical engagement during discussion.

Ten participants were from drawn from Rhodes University, out of which five are African Humanities Program (AHP) Fellows. The AHP Fellows are Ijisakin, Eyitayo Tolulope who presented “the making of prints: forms and techniques of printmaking in Nigeria; Alade, Adetayo O. presented “textual and cross-textual identity of fictional entities”; while Omitola, Omotayo works on “intertextuality in selected Nigerian blogs”. Agbetsoamedo, Yvonne presented “the tense and aspect system of S?l??: a preliminary analysis”; while Bobuafor, Mercy works on “Evaluative Morphology in Tafi”.

Other doctoral scholars are Joseph, J. who works on “Marginalized Masculinity in Ramonu Sanusi’s Un nègre a violé une blonde à Dallas”; Lepheana, J. works on “the impact of translanguaging and acculturation towards implementation of the Incremental Indigenous African Languages programme in former model-C schools (Alfred Nzo West District, Eastern Cape)”. Madolo, Y. presented “Strategies used by translators in the translation of the selected stories from English into isiXhosa; Ortner, G. works on "Action research making use of a mixed methods approach to investigate the use of technology for language teaching in German Studies at Rhodes University". Methodology chapter of the thesis titled “A Case Study of Communication Models used in the Provision of Healthcare for HIV and Tuberculosis in the Eastern Cape, South Africa” was presented by Von Witt, N.

The Inter-Regional Conference/Workshop created an avenue for robust interaction among Humanities and Social Sciences doctoral students from different universities in the Eastern and Western Capes of South Africa. The participants working on issues from different parts of the continent makes intellectual discourse at the conference more robust. Sharing ideals at the conference and participating in intellectual activities along with mentors of long-standing expertise and other emerging scholars broaden my horizons, and afforded me the opportunity to look at my work from a different perspective. I would like to encourage other doctoral scholars to look forward to attending the Conference in the nearer future; the next edition is being contemplated to hold by September 2019. Thanks to the National Institute for the Humanities and Social Sciences (NIHSS) for organizing this conference. 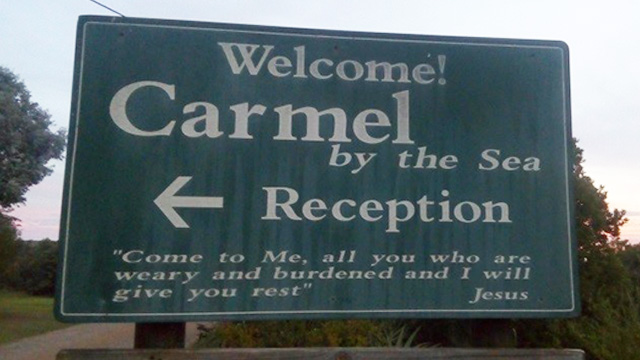 The signpost that welcomes participants to Carmel Guest Farm, George 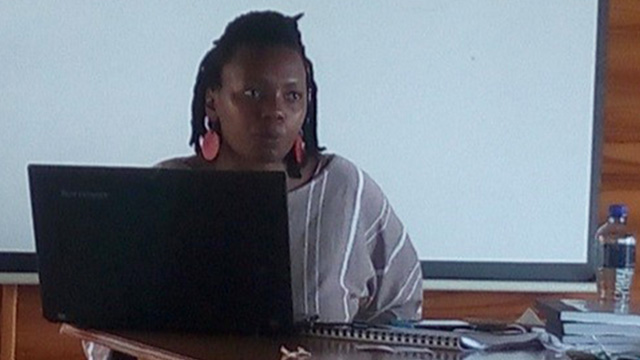 Dr Nomalanga Mkhize speaking on “The triteness of knowing: University and scholarship in the internet age” 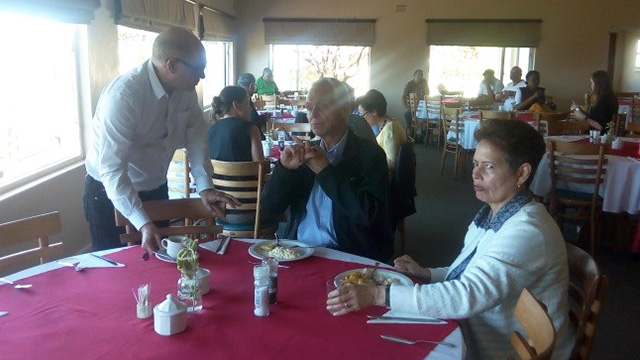 Prof Fred Hendricks and other mentors during breakfast 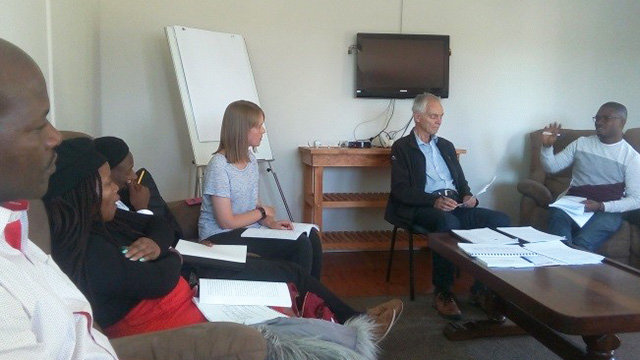 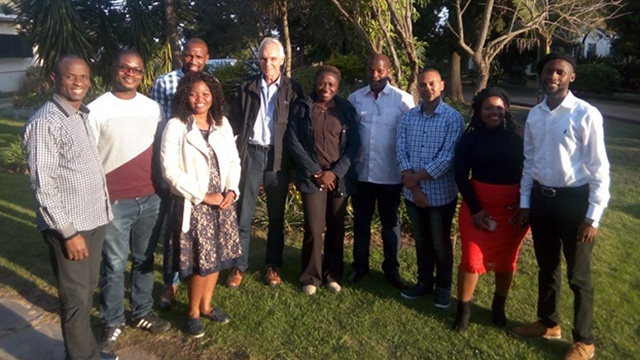 Photograph of the Media, Development, History and Heritage thematic group 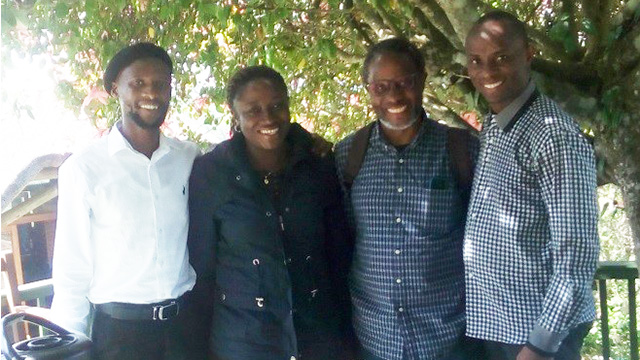 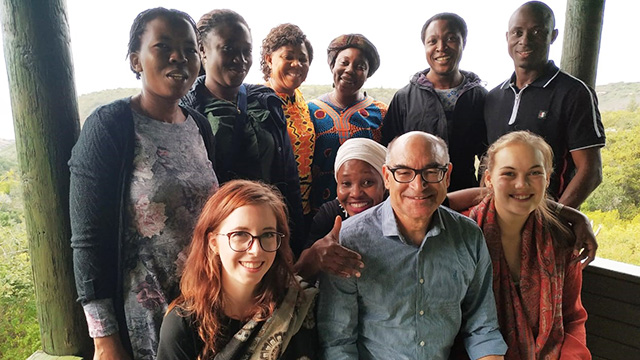 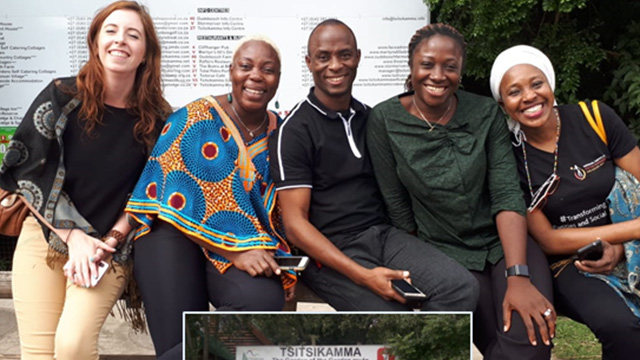 Eyitayo Tolulope Ijisakin is AHP Postdoctoral Fellow; he is currently having his residency with the Arts of Africa and the Global Souths, Department of Fine Arts, Rhodes University, South Africa.