The Residencies for Artists and Writers (RAW) programme warmly invites you to a seminar presentation by Dr Nadine Siegert (Writer in Residence) from the University of Bayreuth, Germany.

Since the end of the civil war Angolan society experiences liberation from the many years' occupation of the war as an everyday experience of the last decades. After 2002 this was substituted with an official narrative of a powerful economic nation. Between the historical independence and the actual liberation of the people from the burden of the civil war lie thirty years of war which have yet to be integrated into the national identity. This also concerns the cultural field and requires a new positioning of the creative sector as well. The post-war euphoria is also noticeable in the art world decisively for the first decade after the war. The artists used the freedom not only to speak about the past, but to call the future their own. Issues such as cosmopolitan patriotism and the question of the internationalization of the Angolan art-world through Biennials and other events will be also discussed.

Making art in Luanda has to be seen in the context of the post-colonial, post-socialist and post-war society. The aim of my PhD thesis was thus to define the activated areas of the collective image archive in artistic practice of the art world of Luanda and thus to investigate the possibilities of participation of artists in the imagination of new Angola. In this presentation, I will give an overview on three generations of artists in Angola’s capital Luanda and look at how they related themselves to the past, the present and the future – with their nostalgic or respectively utopian perspectives.

In the last part I will speak about more recent research interests that came out of this engagement with contemporary art in Angola. I look at the transnational relationships between (former) socialist African countries and the Former East – Eastern Europe and other (post-)socialist countries on different levels such as education or cultural exchange. This new research should broaden the knowledge about a short yet important period of art history not only in Angola but many countries on the African continent.

Dr Nadine Siegert from the University of Bayreuth, Germany, is visiting Rhodes University as a Writer in Residence with the Residencies for Artists and Writers (RAW) programme. She is a researcher, curator and publisher with a focus on modern and contemporary arts of the Global South. Currently she is the Deputy Director of Iwalewahaus, University of Bayreuth and member of the research project Revolution 3.0 at the Bayreuth Academy of Advanced African Studies. She has been a Research Associate with the Rhodes Fine Art SARChI programme since 2018 and is a member of the ACASA Board (2017-2020). Her residency runs from 10 August to 21 October 2018, and she will continue with her current research “the mapping of connections and relations of African artists with the socialist sphere during the cold war”. Since 2015, Dr Siegert has been leading the project African Art History and the Formation of a Modernist Aesthetics that explores the history of the art collections at Iwalewahaus, the Museum of World Cultures (Frankfurt) and the Makerere Art Gallery (Kampala). Dr Siegert received her doctoral degree from the Bayreuth International Graduate School of African Studies in 2013. In 2016, she published her PhD (Re)mappining Luanda. Nostalgische und utopische Zugänge zu einem kollektiven Bildarchiv (LIT). In 2018, Dr Siegert was Brooks International Fellow at Delfina Foundation and Tate Modern, and in 2017 in residence at Vila Sul, Goethe-Institute, Salvador de Bahia.Her research cuts across modernism of the Global South, in particular in the context of the Cold War, socialist aesthetics and socialist modernism, contemporary arts with a focus on Lusophone Africa, curatorial and museum studies. At the University of Bayreuth, Siegert teaches modern and contemporary African arts and curatorial studies, and curates the artist in residency program as well as the Iwalewa Art Award. 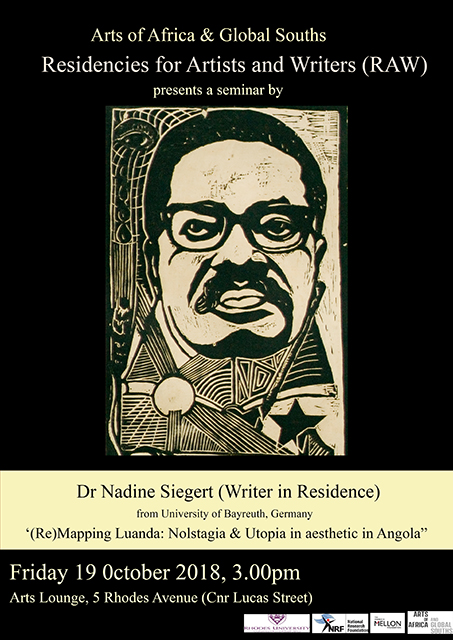