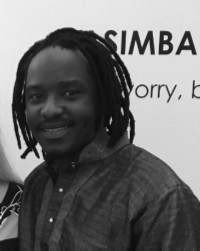 Masimba Hwati is a multidisciplinary artist working in the intersections of sculpture video performance and sound. He holds an MFA from the University of Michigan, Ann Arbor. He graduated from the Harare Polytechnic in 2003. He was most recently, included in the Montreal Museum of Fine Art’s exhibition, Face To Face: From Yesterday to Today, Non-Western Art and Picasso.  In 2017, he was the featured artist for SMAC Gallery in Art Brussels, Belgium. In 2015, he was also one of three artists selected for Pixels Of Ubuntu/Unhu, for the Zimbabwean Pavilion at the 56th Venice Biennale. He was the winner of the Cape Town Art Fair’s Special Projects Section: Tomorrows/Today, with his solo presentation: don’t worry be happy. He is an honorary research fellow at Rhodes University  Fine Arts Department in Makhanda, SA.

His Solo exhibitions include Instruments of Memory / Simbi dzeNdangariro, SMAC Gallery, Stellenbosch, 2016; Quantumlogik at Gallery Delta in Zimbabwe in 2014 and Facsimiles of Energy in 2011, at Gallery Delta, Zimbabwe. Group exhibitions include Trek – Following Journeys at SMAC Gallery, Cape Town in 2015, Between the Sheets: Artists’ Books Exhibition at Gallery East, North Freemantle, Australia, 2012; Color Africa: Zeitgenössische Kunst Aus Zimbabwe, Kulturallmende in Munich, Germany; and Food for Thought, National Gallery of Zimbabwe, both in 2011. In 2012, Hwati received an award for Multi-Media – Tradition, Family and Religion exhibition– sponsored by the European Union. He is a member of the Zimbabwean Cultural Centre of Detroit (ZCCD) Artist Exchange program between Detroit, USA and Harare. He attended The Skowhegan School of Painting and Sculpture class of 2019 in Skowhegan Maine. Masimba is currently an artist in residence ant Hub Bub, Chapman Cultural Center in South Carolina.