Sorry there was an error sending your form.
Giving to RU
Rhodes>Arts of Africa >People>Associate Artists>Peju Layiwola 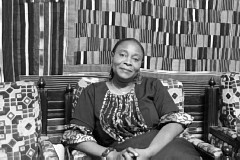 Peju Layiwola (2018 Artist in Residency with the Residencies for Artists and Writers (RAW) programme, Arts of Africa and Global Souths Research programme, Fine Art Department, Rhodes University, Grahamstown, South Africa) is Professor of Art History and current Head of the Department of Creative Arts at the University of Lagos in Nigeria.  She is the scion of a family with a notable tradition in art making. Her mother, Princess Elizabeth Olowu, daughter of Oba Akenzua II, King of Benin who reigned from 1933 to 1978, became renowned as the first female to cast bronze in Nigeria. Layiwola is consolidating on this heritage and also taking advantage of her dual Yoruba and Edo ethnicities to enrich and diversify the range of artistic production and community service. Layiwola attended the University of Benin in Nigeria and obtained a BA in Art in jewellery and metal casting and later proceeded to the University of Ibadan, where she earned a PhD in Visual Arts in 2004. She combines an active studio practice with academic research, works in a variety of media and focuses on personal and communal histories in which Benin is centralized as both an ancient kingdom and a contemporary city. Her various art projects include the solo show, Benin1897.com: Art and the Restitution Question, (Lagos/Ibadan 2010) and the collaborative public art project, Whose Centenary? (Benin City 2014). Her works were featured in Dresden, Germany and Madrid, Spain in 2015/2016 in the exhibition tagged Boundary Objects, hosted by Artefakte, a group based in Berlin, Germany.  She has won several grants and nominations such as US Department of State grant for the International Visitors Leadership Program on Cultural Preservation (2011) and has Partnered with the Bronx Museum of Arts, New York in the US State Department sponsored Hilary Clinton SmARTpower Project, (2012). More recently, she has been the recipient of the US Consulate Grant (2017) Goethe Resident Artist Grant, Kunstsammlung Noldtrine Westfalen, in Düsseldorf, Germany (2017) and Getty recipient, CAA, Los Angeles.  In 2004, she founded an NGO, the Women and Youth Art Foundation (WyArt), where she puts her art at the service of the community by imparting relevant skills to women and youths outside the university environment. She serves as facilitator for the Bruce Onobrakpeya Foundation and the Omooba Yemisi Shyllon/Unilag Art workshops.