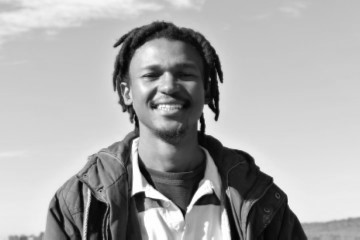 NQABA SIPUNZI is an honours student in art history from East London; however, he is currently based in Grahamstown at Rhodes University. Sipunzi won the Graham Hayward Award for the most promising painter in his Level 2 class at Walter Sisulu University, where he completed a National Diploma followed by a Bachelor of Technology Degree in Fine Art. He has taken part in student exhibitions at the Lovell Gallery in Cape Town in 2011, Unisa Studio Gallery in Pretoria in 2012 and the Albany Museum at the Grahamstown Arts Festival in 2014, 2015 and 2016. He has also been involved in student activism such as the organisation of the 2015 anti-xenophobic March at Walter Sisulu University.