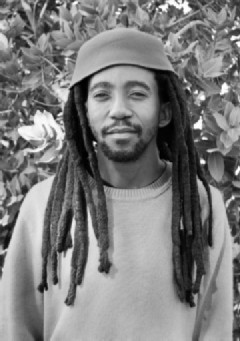 Sikhumbuzo Makandula was born in De Aar, and currently lives and works between Johannesburg and Grahamstown, South Africa. He works with photography, video and performance art. He studied Fine Art at Rhodes University, South Africa, and did a residency at the Nelson Mandela Museum, Mthatha in 2010. As the 2011 Sasol New Signatures runner-up winner, he exhibited at the Pretoria Art Museum. In 2012 he exhibited at the Joburg Fringe Art Fair and participated in the Art-Connect programme facilitated by Visual Arts Network of South Africa, Johannesburg. In 2013 he participated in a group exhibition at Nirox Projects, Arts on Main, Johannesburg, as well as First Floor Gallery, Harare, Zimbabwe during Harare International Festival of Arts. He was part of the group exhibition at Ecole Cantonale d’Art du Valais, Sierre, Switzerland in 2014. During National Arts Festival 2014 Makandula participated in Blind Spot site specific performances, as well as ANALOGUE EYE: Video Art Africa. In 2015 he exhibited at the Wiener Festwochen in Vienna, !Kauru 2015: Towards Intersections at UNISA Art Gallery, Pretoria, Joburg Art Fair, That Art Fair, Cape Town and participated in Infecting The City Festival, Cape Town. In 2016 he had solo exhibitions at Njelele Art Station, Harare, Zimbabwe and at Alumni Gallery, Albany history building Museum, Grahamstown. He participated in a group show, Situation, at Point of Order gallery, Johannesburg in 2016. He worked towards his Masters in 2017.