Sorry there was an error sending your form.
Giving to RU
Rhodes>Arts of Africa >People>Masters Researchers>Alumni>Andrew Mulenga 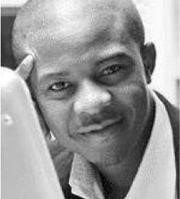 Andrew Mulenga is an award-winning, arts and culture writer who received the 2012 CNN African Journalist Arts & Culture Award. He contributes regularly to The Post Newspaper, the Bulletin & Record and the Partners Guide magazines in Zambia, as well as the UK-based Vision magazine. He is a founding editor and contributor to Grand Touring Magazine in Zambia. Mulenga is a member of the Arts Council of the African Studies Association (ACASA), as well as the International Association of Art Critics (AICA) based in Paris. He is the Interim Chairman for the Arterial Network - Zambian Chapter, a continental network of creative practitioners as well the founder the Hole In The Wall Children’s Art Competition funded HIVOS.  Mulenga began his career as a graphic designer in 1994. He also has a passion for writing and in 2003 he was appointed Deputy Editor for the Education Post and served in this capacity for eight years and six months. In this position he supervised five reporters, a photographer and two layout staff. The job involved assigning reporters, copy editing as well as page layout and design. Although his official title was Deputy Editor for the Education Post, he had already started writing as the Post Newspapers resident art critic and visual arts journalist. He was allocated a full page to run weekly articles that culminated into a widely read column, Andrew Mulenga’s Hole in the Wall which turned out to be the country’s sole consistent source of coverage on the visual arts. From 2003 to the present he has published over 480 articles in The Post alone and several others in various publications. Writing on contemporary Zambian art for over a decade he has realised that the arts in Zambia need to be much more rigorously documented and analysed. This realisation has inspired Mulenga to develop his arts writing skills in the context of academic research and writing with the hope of teaching Art History in Zambia in the near future. Mulenga has travelled extensively for professional purposes and has been to Argentina, Botswana, Cameroon, England, France, Italy, Kenya, Malawi, Mali, Mozambique, Morocco, Sweden, South Africa, USA, Wales, Tanzania, and Zimbabwe. Andrew Mulenga completed his MA degree in Art History at Rhodes University in 2016 and his MA supervisor was Prof Ruth Simbao.