Sorry there was an error sending your form.
Giving to RU
Rhodes>Arts of Africa >People>Masters Researchers>Alumni>Eben Lochner 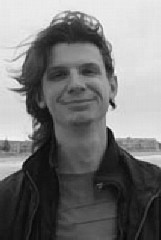 Eben Lochner was born in Fort Beaufort and lives and studies in Grahamstown. He attended Rhodes University where he obtained a BA Honours in Art History in 2008. He has continued his studies at Rhodes obtaining a Masters Degree in Art History. His research was focused on the role and problematic history of community art centres in South Africa, with a particular focus on the history of the Community Arts Project (CAP, 1977-2008) in Cape Town. Lochner has presented on his work at three conferences. In November 2009 he presented a paper at the Rhodes University Postgraduate Conference titled "The Democratisation of Art: The Community Arts Project (CAP) and the role of Alternative Art Spaces in South Africa". In March 2010 he presented the paper "The Community Arts Project (CAP): The Role of the Arts in Building Community and Artistic Development" at the international Art and Social Justice Conference in Durban, South African. This conference received direct support and patronage from Koichiro Matsuura, the Director General of UNESCO. In October 2010 he presented the paper "The making of South African art: The Community Arts Project (CAP) and the search for local relevance in artistic practice" at a local SAVAH conference in Johannesburg. Eben has lectured a number of courses at Rhodes University in 2009 and from 2011-2015. This includes a course derived from his MA research on South African art history, which interrogated the main discourses that South Africa has had in relation to the arts. He continues researching South African art with a particular interest in linking local artistic practice and discourse to global discourses and histories though a genealogical study. He is investigating the use of Humanism as a post-colonial critique in the work of South African artists. This includes an examination of the historical figure of the cultural worker as well as Black Consciousness interrogations of identity, race, and artistic creativity. He has published in Third Text. Prof Simbao supervised his MA.