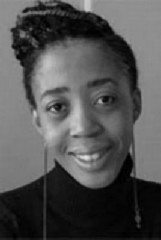 Lerato Bereng was born in Maseru, Lesotho and is currently a curator at Stevenson Gallery in Johannesburg, South Africa. She completed a MFA in Curatorial Practice (with distinction) from Rhodes University in 2013 and a B.A. in Fine Art in 2007 with distinction in Studio Practice. In 2008 she was contracted as one of five Young Curators at Cape Africa Platform (CAPE). On behalf of CAPE she completed a traineeship at Goodman Gallery Cape Town as well as co-producing Sessions Maputo in Mozambique. In 2008 she was appointed assistant curator for Scratching the Surface Vol. 1, an exhibition curated by Gabi Ngcobo and Mwenya Kabwe. For CAPE Bereng curated Thank You Driver, an exhibition on mini-bus taxis that was one of three Young Curator exhibitions on the CAPE 09 Biennale in May 2009. Lerato was assistant curator for Dada South, an exhibition curated by Roger van Wyk and Kathryn Smith (12 December 2009- 28 February 2010). Bereng is a member of the curatorial board for Focus 10, a biennale held in Basel, Switzerland. She was also selected as one of 13 young curators from around the world to attend the Curatorial workshop for the 6th Berlin Biennale (2010). In 2010 she curated an exhibition at the Michael Stevenson Gallery entitled Featuring Simplicity as an Irrational Fear. Her MFA supervisors were Prof Ruth Simbao and Dr Nomusa Makhubu.