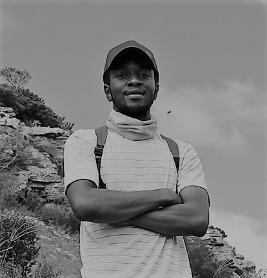 N'lamwai Chithambo was born in Edinburgh, Scotland in 1997 to Malawian parents. He works predominantly in the medium of oil paint. In 2019, Chithambo completed a Bachelor of Fine Arts degree with distinction in Fine Art Practice 4 at Rhodes University. He has twice featured in the annual 40StonesInTheWall Art Exhibition held at the National Arts Festival in Makhanda (2016, 2019) and has had work selected for the Thami Mnyele Fine Arts Awards Top 100 Exhibition in 2019. N'lamwai Chithambo lives and studies in Makhanda where he grew up.

Chithambo’s work increasingly focuses on identity, usually his own. He has looked at various aspects in his undergraduate studies such as ethnicity, self-consciousness and culture but aims to use his art to reflect his Christian faith and the influence of God on his identity and life as a whole. The comic book genre has recently had a big influence on Chithambo’s style of work with artists such as Loyiso Mkize among those whose art he constantly observes. While he enjoys working on semi-complex conceptual paintings, Chithambo also enjoys portraiture as well as drawing and painting in the outdoors.