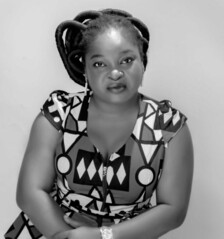 Oluwatosin Kooshima Tume is a 2022 Postdoctoral Fellow with the NRF/DST South African Research Chairs Initiative (SARChI) in Geopolitics and the Arts of Africa, under the Arts of Africa and Global Souths research programme, in the department of Fine Art, Rhodes University, Makhanda, South Africa. She holds a BA in English, MA in Theatre Arts, and PhD in Performing Arts from the University of Ilorin, University of Abuja, and University of Ilorin respectively. Her research interests include choreographic theories, African festivals and theatre, feminist identities in African literature and performances, and trends in African dance practice. An award winning playwright and scholar, Oluwatosin teaches playcreating, dance choreography, theatre music, and production workshops in the department of Theatre and Media Arts of the Federal University Oye-Ekiti, Nigeria. She is also a performing artiste, theatre creator, and culture consultant. Her scholarly articles are published in several international books and journals. She is the 2017 recipient of the SONTA-Theodora Tobrise Young Female Thesis Assistance Grant, awarded by the Society of Nigeria Theatre Artists (SONTA). She has also won several TETFUND research grants. In 2021, she served as Research Consultant, on the Breathing Space: Performing through the Pandemic Project commissioned by ProHelvetia, a Swiss Agency for Development and Cooperation, in partnership with Savanna Trust (Zimbabwe), TCube Theatre Company (Nigeria) and Mtsinje Trust (Zambia). She is a a 2019 Fellow of the Mellon Publishing and Research of the South: Positioning Africa (PROSPA) Writing Workshop, University of Lagos, Nigeria; 2021 Fellow of the British Academy Writing and Publishing Workshops, National Theatre, Lagos; and a 2021 Fellow of the Ife Institute of Advanced Studies.

Oluwatosin has numerous theatrical productions under her belt, and to her credit, several plays and dance scripts, which have been performed locally and internationally. As the Drama entry for the Nasarawa State Dance and Drama Troupe, her play The Pact won the first place at the NYSC Zonal Cultural Festival in Bauchi, 2009. Her Sweet Poison was among the selected scripts for the 2015 ASSITEJ SA New Writing for Young Audiences in Africa programme which was run in partnership with The Kennedy Centre’s New Visions New Voices project in Washington D.C, United States, and The Soweto Theatre in Guateng, South Africa. The play was read at the ASSITEJ SA African Youth Theatre and Dance Festival held at the Artscape Theatre, Cape Town from 22nd – 27th June, 2015. Her play titled Not That Woman is the only Nigerian entry among the seven plays published in the Contemporary Plays by African Women anthology by the Methuen Publishers for the School of Theatre, Performance and Cultural Policy Studies of the University of Warwick, via the platform of African Women Playwrights Network (AWPN). The play was also selected for staging at the Women Playwrights International Conference in Chile, 2018. Oluwatosin’s play - The Victims, won the Association of Nigerian Authors (ANA) 2019 Drama Award, while her play Boluwatife: As the Lord Pleases? was produced by Twist Theatre Development Projects in Durban, and performed for the South African Virtual National Arts Festival in 2020. Her latest work Blood on my Hands was published by Swifts Publishers, Nigeria in 2021. Another of her plays – Iyefemigha, is billed to be staged at the Women Playwrights International Conference in Canada, 2022, while her Pa’tanmo is also billed for staging at the HerStory Festival of plays by women in Johannesburg, by April, 2022.