Sorry there was an error sending your form.
Giving to RU
Rhodes>Arts of Africa >People>Visitors>Annemi Conradie 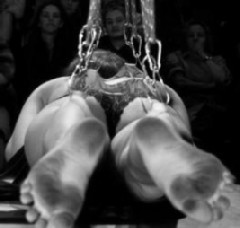 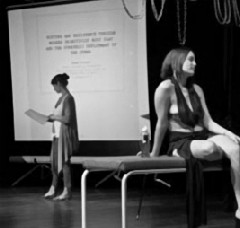 Annemi Conradie was a Visiting Lecturer in Art History and Visual Culture in the Fine Art Department in 2011 and during her stay she contributed to the activities of the Visual and Performing Arts of Africa focus area. In collaboration with the Drama Department she participated in Interdisciplinary Encounters (2011-2013) curated by Athina Vahla, producing the SUSPENSION LECTURE in the Rhodes Box Theatre.  This was an experimental project in which an academic paper on the practice of subcultural body suspension was delivered by Conradie while John Wayne 5ive suspended Alice Harlyquin from steel hooks that were pierced through her flesh.

The event explored the rhythms and tensions created between the bodies and their actions within the liminal space of the stage, exposing the contradictions and conflicts between scholarly interpretation and subcultural practice. Focusing on the preparatory rituals and the aftercare demanded by this feat of physical endurance, the performance highlighted aspects of the art form that are often overlooked.