Sorry there was an error sending your form.
Giving to RU
Rhodes>Arts of Africa >People>Visitors>Athina Vahla 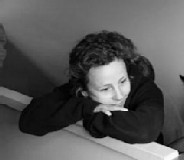 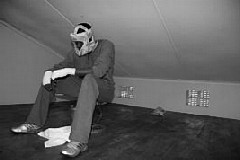 Athina Vahla (left) collaborated with Ford Evanson, Dion van Niekerk, Heike Gehring and Mark Wilby to produce the Topos performances for the Arts Lounge at the National Arts Festival in 2011. She has taught in the Drama Department at Rhodes University and currently holds an honorary research position at Rhodes. Vahla brought a number of people from the Drama and Fine Art departments together in Topos and other collaborative projects, including ViPAA members Gerald Machona (right), Rachel Baasch and Annemi Conradie. (Photos: Ruth Simbao).

“Vahla is an interdisciplinary artist, teacher and performance researcher specialising in choreography. Originally from Greece, she arrived in the UK in 1991 having won the Greek National Choreographic Award. In London, Athina was awarded two scholarships to further her dance studies at Laban where she received the Bonnie Bird Choreography Award 1994 before undertaking an MA in interdisciplinary arts at Middlesex University. Since then, she has worked extensively as a choreographer and teacher and produced a steady stream of critically acclaimed work across Europe. Since 2001, Athina has concentrated on large scale, site-specific work that creates evocative environments for performers and audiences to inhabit and explore. She is particularly interested in the historical elements of site and how traces of the past inform the making of new work. Underpinning her process is a concern with humanism and contemporary society” (See Athina Vahla www.athinavahla.com).