Sorry there was an error sending your form.
Giving to RU
Rhodes>Arts of Africa >People>Writers in Residence>Previous>Nomvuyo Horwitz 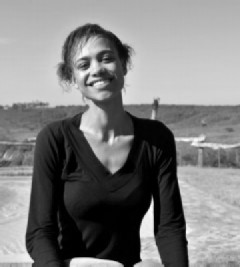 Nomvuyo Horwitz is currently undertaking a research assistantship with Prof. Ruth Simbao at Rhodes University. She completed a BA (Hons) in History of Art at the University of the Witwatersrand in 2015, where she was awarded the Stein-Lessing Scholarship, and the Standard Bank Group African Art Essay Prize. In 2014 she received a BA from the University of Cape Town, receiving the Class Medal in her final year. Horwitz’s BA degree combined Art History and Visual Culture with Political Science. This disciplinary bleeding has continued through her postgraduate research: she is concerned with the impact of social and political change on the production of meaning and value for art objects from across Africa. In October 2017, Horwitz will undertake an MPhil in African Studies at the University of Cambridge, under the supervision of Prof. David Maxwell. Her research there will focus on mission-generated collections of ‘art’ objects from today’s Democratic Republic of Congo.