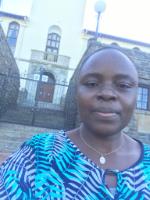 Gisele Sinasson grew up in a village in the northern part of the Republic of Benin with a mother who loved and used to farm. Her father was a very passionate agronomist who worked for the national institute for research in agriculture until he passed away. She spent all her childhood going to the farm during week-ends and holidays. This had significantly influence her choice of agricultural sciences at the university.

Gisele completed her undergraduate and postgraduate studies in agricultural sciences, option forestry and management of natural resources. She investigated, for her Engineer degree, people willingness to grow teak and the main goals of plantation as well as sstructural and ecological characterisation, and management of private teak plantations in Benin. That was the beginning of her integration of ecological and social sciences. Later, she worked on the structural characterization and dynamics (recruitment, mortality, regeneration and growth) of natural forests with emphasis on some valued species, through her MSc research. She has been captured by the fact that despite their great importance for local population, many endogenous species are still lacking scientific information on their ecology and sylviculture while their populations are threatened. Gisele then decided to focus her interest on useful forest tree species (especially medicinal and fruit species) with the ultimate goal to contribute to their valorization and conservation through plantation in home gardens, fields and streets. So, her PhD research was on local knowledge and autecology of two fruit and medicinal plant species (Mimusops species) in Benin, as a first step toward horticultural purposes.

Gisele is now a postdoctoral scholar at the department of Environmental Science. She works with Professor Charlie Shackleton on social and ecological aspects of forest resources typically those used by local people (non-timber forest products ntfps). She hopes through her research to draw recommendations on (i) gender-linked exploitation of ntfps as practices or policy decisions and (ii) multiple factors impacts on growth, production and survival of ntfp plants, for sustainability purposes as well as (iii) to bring some inputs towards the global discussion on food security through wild vegetables.