Opera and the Silver Screen 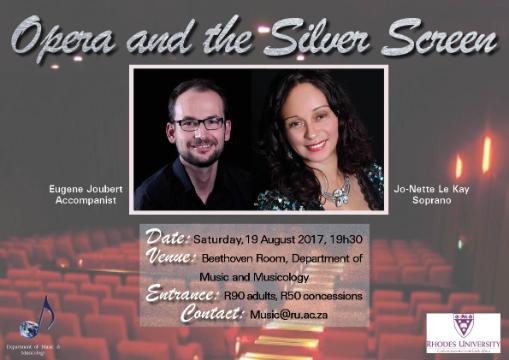 How many of us remember movies by their Soundtracks? I definitely am one of those people. This show will pay homage to the movies in which famous operatic pieces were performed. Immediately one remembers Silver screen classics like 'Pretty Women, The Fifth Element, A Room with a view, The Shawshank Redemption, Copycat, Driving Miss Daisy, Fatal Attraction, The Life of David Gale, Diva, The Marian Anderson story' and many more. Arias from operas like The Marriage of Figaro, La Traviata, Turandot, Madama Butterfly, La Wally, Rusalka and Lucia di Lammermoor springs to mind. Come and join us as we relive these dramatic moments in our favourite movie soundtracks.

South African Soprano, Jo-Nette Le Kay, currently is the Voice lecturer at Rhodes Music department and simply loves her students.  She has performed both nationally and internationally and has also belonged to renowned opera companies like Hampstead Garden Opera, Opera Integra , Cape Town Opera, Sempre Opera groups like The South African Sopranos. She is very excited to perform again especially in such good company. Eugene Joubert is an extremely intuitive accompanist and will be joining her for this concert. Jo-Nette says  “Sometimes I think Eugene can read my thoughts and accompanies me accordingly.”

South African pianist Eugene Joubert made his European debut in 2012 with performances of Bernstein's Candide in Switzerland, in collaboration with Reakopana Opera and L'avant-scène Opéra, Neuchâtel. Since then, he has appeared in numerous productions for Big Wig Opera (La Bohème, La Traviata, Madame Butterfly, L'elisir d'amore), TUT Opera (Faust), and Sempre Opera (Amahl and the Night Visitors).

Eugene holds a master's degree in collaborative piano from the Shepherd School of Music at Rice University in Houston, Texas. Notable performances include works such as the Quartet for the End of Time (Messiaen), Sonata for two pianos and percussion (Bartók), as well as the clarinet trios of Beethoven, Brahms, Glinka and Muczynski. He appeared in the biannual chamber music festivals at the school, and made his debut in 2007 at the Kennedy Centre for the Performing Arts, Washington, D.C.

Eugene is a repetiteur at the TUT Department of Vocal Arts in Pretoria, and teaches piano at St John's College, Johannesburg.