Postdoctoral fellows in the School of Languages and Literatures 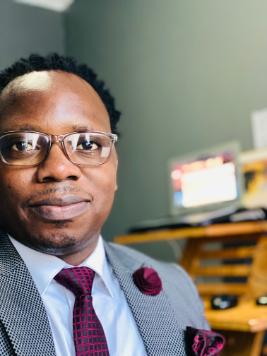 Mambambo was born in Zimbabwe where he studied up to Honors level before relocating to South Africa where he undertook his master’s and PhD studies. Upon arrival in South Africa, he taught English in High School and later worked as an English Lecturer at a TVET College in Cape Town. He graduated cum laude for both his Honors and master’s studies. He was the first in Africa to translate Ngugi’s “Decolonising the mind” into an African Language, ChiShona. His translated ChiShona book entitled “Kutapanura pfungwa Dzakatapwa” was published by the Centre for Advanced Studies of African Society and was launched at the first in Africa biennial Conference of the International Association of Colonial and Postcolonial Linguistics that was hosted by the University of the Western Cape in June 2021. He also translated Professor Prah’s “African Languages for the Mass Education of Africans” and his translated book was published by CASAS in 2015. He joined Rhodes as a Post-doctoral Fellow in June 2021 under the NRF SARChl Chair “Homecoming Project” that is working on the further translation of “Decolonising the mind” into Five African languages, isiXhosa, isiZulu, Ndebele (of Zimbabwe), Sesotho and Kiswahili. He has presented at international Conferences on his translation of this current text.