The Rand Merchant Bank's "Expressions Fund" was established to support projects that preserve and promote cultural heritage in South Africa.  Built into the Expressions Fund's mission is its aim to foster creative endeavors (such as performance events, exhibitions, community outreach initiatives) that promote arts, culture and heritage as outcomes of the projects it funds.

In January 2008 the Rand Merchant Bank Expressions Fund awarded ILAM funding to support the costs of a 24 month project to accomplish cataloguing and digitizing the Hugh Tracey collection of original field recordings (952 reels) housed in the ILAM archive. This project will complete the cataloguing and digitizing of the collection of 12" pancake reels that comprise Hugh Tracey's original field recordings (719 reels remain to be digitized) 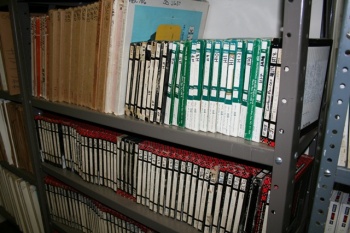 Over the 12 month period from November 2005 - November 2006, ILAM's sound engineer digitized 233 of the 952 pancake reels that comprise the collection. Based on that experience, it is estimated that it will take a minimum of 24 months to complete the digitizing of the remaining 719 reels in this collection and simultaneously create metadata files for each item on these 719 reels, plus for the 233 reels already digitized.

The time required to accomplish cataloguing and digitizing of the HT Fieldtape collection is considerable because of their fragile condition, the difficulty in re-spooling them, and the frequent need to stop and mend/splice the 1/4 inch magnetic tape which often snaps during re-spooling. The fact that ILAM has only one tape bed that can play these recordings, thus only one work-station to carry out the very meticulous, careful handling of the reels, also slows the process.

Work on this project commenced in February, 2008. It is being carried out by Elijah Madiba, sound engineer; Tatenda Mhunduru, sound engineering assistant; Zandile Pinini, cataloguing librarian; and Kgosi Kgadiete, meta-data capturer. The entire collection will be made accessible from ILAM's On-line Sound Archive, via the ILAM website, as material is processed and deliverable to the ILAM server. 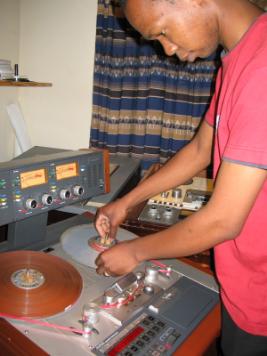 On-line Archive users can identify which of the Hugh Tracey collections an individual song comes from by its catalogue designator. In the case of the original fieldtape collection, the catalogue designator is "HTFT" followed by the catalogue number. Users will find multiple copies of various songs in the sound archive because multiple copies exist according to the various media onto which Hugh Tracey transferred his field recordings when he returned from his field excursions. Thus one may find the same song from the original field recording exists on an acetate disc, on a vinyl test pressing, on a commercially released 78 rpm record, and on the Hugh Tracey Broadcast Series.