Seventy-seven year-old Yvette Van Wijk will soon receive the highest academic qualification that can be bestowed on someone, proving that it is never too late to further your studies. She spoke to Julian Jacobs from Rhodes University’s School of Journalism and Media studies about her journey.

Q: How does it feel to be a 77-year-old woman graduating with a PhD at Rhodes University?

A: It has taken since 2011 when I first registered, which must seem like a very long time if you are still young, but not really so long at nearly 78! A 77-year-old getting a PhD should not seem so surprising, only some people lose brain cells as they age - more life experience should make it easier to manage the process and not harder.

Q: What made you decide to complete a PhD at Rhodes University in Botany?

A: I was always interested in plants, since a very little girl walking in the veld with my grandfather, and later with my little brother and his nanny who helped us find pretty flowers, and mark where they grew by painting a green splodge on a nearby rock. We had a great deal more freedom then than children do now, we could walk alone all over the farm, or ride on horseback for miles across the eastern Free State countryside.

That early interest in plants, indigenous knowledge or what people used plants for, and rocky terrain, later led to me hiking thousands of kilometres, 4x4ing all over South Africa, and hunting for rock art. Eventually this all came together in 2011 when I had the time, taxonomic experience, and computer ability to register for a PhD which encompassed all these areas of interest.

Q: Do you feel that anyone out there who has a desire to study at any age can do exactly as you did?

A: Yes, the age should not matter - it is the desire to do it and the opportunity that is important. 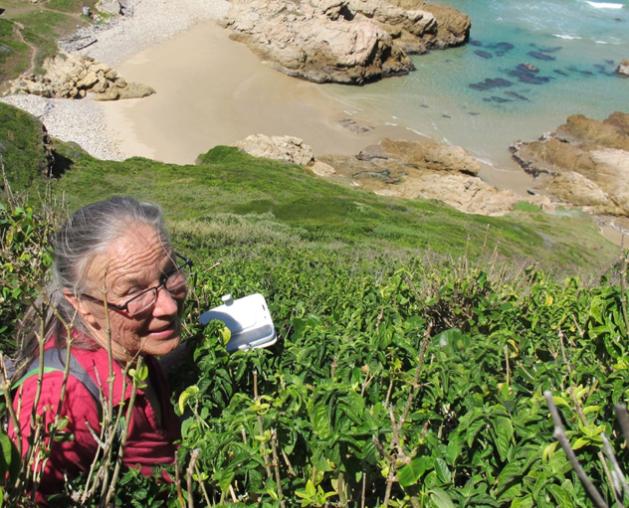 Q: What would you say to that someone who stumbles upon your story... about how you decided to study further at an age where you are supposed to be enjoying your retirement?

A: After my children had all started school, I did a rather haphazard few years of botanical taxonomy at Rhodes University, mainly in order to improve the accuracy of my botanical drawings for a book I wrote and illustrated about the use of Medicinal plants / herbs in South Africa. After that, I was hooked on the botany and after coming to live in the southern Cape – with absolutely no intention of retiring at all – we joined a group doing Protea Atlasing and I also became honorary curator of the Southern Cape Herbarium for about 13 years. After that, I still needed something more stimulating than housework and gardening to do. I thought I could turn an interactive CD I had made on Proteas of the Southern Cape into a Master of Science degree. This did not work out, but I decided that as it seemed I might be allowed to register for a Science degree without having actually done science, then I might as well go for it.

Q: How was the PhD journey for you and your family? Were they supportive? How many kids and grandchildren do you have? What do they say about your achievement?

A: Yes, my family was very supportive, and my husband was very much in favour which makes a huge difference! Hiking and travelling with my husband after he took early retirement, meant twenty and more years of collecting ethnobotanical data, and collecting and studying plant specimens at archaeological sites. We were lucky to have an interesting and adventurous group of hiking companions with the same interests. We have two daughters and a laat lammetjie son and we have two grandchildren too far away in Australia. They were always interested and supportive, but being very involved in their own lives and interests gave us freedom to do what we wanted to do and go to interesting places. As we all got older, I realised that a lot rubbed off on the children and they are all with me now for my graduation which is just fantastic.

Q: Where do you live now in the Southern Cape area?

A: In 1992, we came to live in a very small place called Hoekwil, just up the mountain from Wilderness. We have a plot of 3.5 hectares overlooking the Touw River and with a fantastic view of the Outeniqua Mountains that stretches for a hundred kilometres or more on one side and the sea on the other. Our ground is mostly left to wild plateau forest, thicket, and scrubby fynbos. We set up a trail camera last year and have captured images of bushbuck, caracal, bush pig, genet, porcupine, baboons, grey mongoose, and honey badgers, only a hundred metres or so from our house. The garden near the house is an unruly mixture of heritage roses (many collected by me around Grahamstown) and herbs, cheek by jowl with Proteas, Erica's, Watsonias, and many other wild and mainly local, plants and trees.

Q: I believe you studied at Rhodes University in the 1950/1960s where you received a BA in Fine Arts? How has Rhodes changed since then, in your opinion? What did you do in the in-between-years?

A: My first degree was a BA (Fine Art) from Rhodes University, 1958 to 1961.  There were only about 750 students at Rhodes University then! Hardly anyone had cars, so men with cars were at a huge advantage! We walked everywhere and were strictly supervised in residences. After nine years in boarding school, I was among the first students to seek permission to stay “downtown” as an Oppidan. The midday meal each day at Kaif cost me three pounds a month (we were still on pounds and shillings then!), and I lived on a 10 pound a month allowance! I left Rhodes University at 20 years old and spent a year overseas at a Munich Art School and later doing supply teaching in London, which was murder! I came home and got married in 1963 and lived in Graham Street in Grahamstown, but in 1971 we moved to a small holding at Stones Hill. I grew herbs, vegetables and old roses, made cheese and butter and sold eggs plus all the rest, at the Home Industries store. I also wrote some books and articles about plants for First Aid and gave courses and lectures on all these aspects of living semi-self-sustainably on a small holding. I was really lucky that as a volunteer at the Albany Museum in the Schonland Herbarium, I was allowed to gate crash a few early computer courses for Rhodes University staff on word processing, and later publishing and database management.

Q: What made you come back to study your PhD at Rhodes?

A: I first decided on Rhodes University because my father, who died in the war when I was one-years-old, had been at Rhodes University, and that was pretty much all I knew about him! It seemed sensible to register there again for my Masters, which became a PhD, as it was only a four-hour drive to get there from Hoekwil. I still knew people at Rhodes University including my two supervisors – plus, it was an opportunity to keep in touch with old friends in Grahamstown.

Q: The work on your PhD, I am told, involved not just your love for nature, but other interests such as Archaeology, Indigenous Knowledge around plants and caves, and Khoi histories…how did this become a reality for you, an area of interest?

A: I always enjoyed finding out about local traditional uses of plants, having started this in the Free State as a child, later in Grahamstown, and during holidays in the then Transkei. I was also fascinated by Rock Art and caves in general, and by the plants which grew so thickly at most of the sites. After moving to Hoekwil I was asked to help with a project to test the use of traditional medicinal plants at the Knysna Clinic and I started to study local Khoi and San history and their use of plants. The main reason for connecting it all up was that I realised that the plants found growing at the archaeological sites were almost always among those still being used by southern Cape modern communities. So, I had a huge reservoir of material, knowledge, and data to build on, which I felt would go to waste if I did not do something with it. I could never have completed my thesis in seven years if I had not had all that under my belt already. Many people do not have the luxury of following their interests for so long, nor the opportunity of collecting and storing their data in a usable digital form.

Q: If you could surmmarise your PhD - what would it say?

A: Difficult question! Firstly, I think that it is really important that academic disciplines start to work together to do truly interdisciplinary research, so that the connectedness of everything is more obvious and is recognised. The hardest thing about doing the PhD was to integrate the three different disciplines without separating them! Summarising without being academic about it, I would say that people and plants and the landscape are far more tied to each other than today’s generation realise and we need to get back to acceptance and reliance on the holistic oneness of everything.

Q: How would your work impact South Africans?

A: I would hope it would give more depth to the understanding of how people, plants, and place have always interacted and depended on each other. By recognising the value of the knowledge held by early peoples in Southern Africa and everywhere else in the world, and how much of this knowledge is still held by modern descendants, it could give apparently acculturated indigenous communities a chance to reclaim a pride in their culture and knowledge and be recognised as descendants of South Africa’s First People.