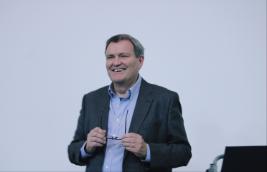 Honorary Professor Adam Ashforth was our 2019 Nelson Mandela Visiting Professor. He is Professor of Afro-American and African Studies at the University of Michigan in the United States of America. Professor Ashforth has published extensively on state formation and the political implications of spiritual insecurity in everyday life in South Africa. During South Africa's transition to democracy he spent many years living and writing in Soweto. He is currently researching responses to the HIV/AIDS epidemic in everyday life in rural Malawi and ethnic conflict in Kenya's Rift Valley. His publications include four books: The Politics of Official Discourse in Twentieth-Century South Africa; Madumo, A Man Bewitched; Witchcraft, Violence, and Democracy in South Africa; and The Trials of Mrs K: Seeking Justice in a World of Witches.