Agriculture in a changing climate

Future climate for much of the global grain producing regions is predicted to be warmer and dryer with an elevated atmospheric CO2 concentration (eCO2). Drought and warm temperatures decrease crop yields, while eCO2 offsets these effects, although responses show genotypic variation. We have been investigating the response of maize and wheat genotypes to the interactive response of drought, warm temperatures and eCO2 to provide insight into suitability of particular genotypes in future climates, empowering us in the maintenance of food security.

Fundamental differences in photosynthetic physiology determine that C3 crops gain direct photosynthetic advantage from eCO2 while C3 & C4 crops become more water use efficient under eCO2. We have demonstrated these differences using responses to severe drought, conditions that are appropriate to predictions for southern Africa and have used regionally appropriate genotypes.

We have demonstrated that eCO2 can completely mitigate the effects of drought on the yield of six maize genotypes, resulting in water saving equivalent to 35 mm of rainfall. Additionally, eCO2 benefits irrigated maize showing that even under current conditions, high temperatures resulted in water limitations even with soil irrigation. (Ripley et al, 2022).  In wheat, a C3 crop, eCO2 only partially mitigates the effects of drought and elevated temperature when responses were averaged across 10 genotypes (Mavindidze, 2021). However, considerable genotypic variation showed the potential for selecting genotypes that would perform as well under future conditions as they do at current CO2 concentrations.  We have also demonstrated that simple experimental protocols using irrigation and warming can replace expensive eCO2 experiments in the screening of potential genotypes (Ripley et al, in submission). 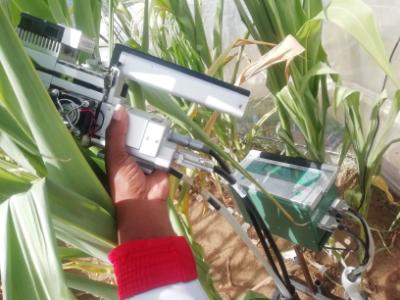 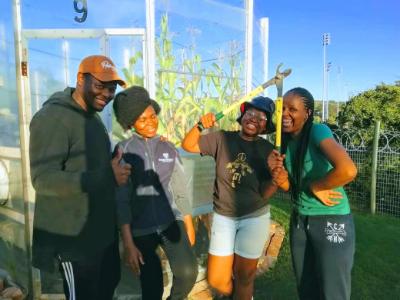 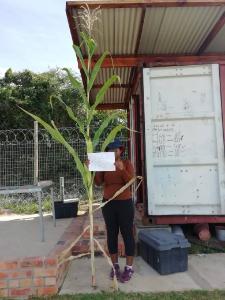 Maize (Zea mays) is an important food crop in South Africa, necessitating an in depth study of how this species and various cultivars within it will respond to the elevated CO2 concentrations and water limitation predicted for future climates. Tebadi Bopape’s MSc research, under the supervision of Prof Brad Ripley (Rhodes University) and funded by GrainSA looked at the interactive effects of elevated CO2 and drought on maize cultivars that are selected for growth in the western and eastern growing regions of South Africa. More information on the contribution of GrainSA to this project can be found at GrainSA climate change 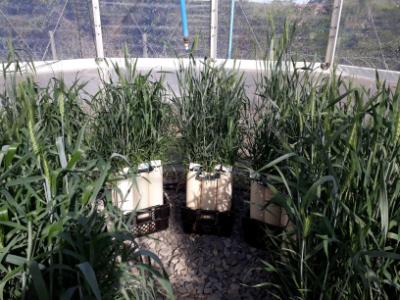 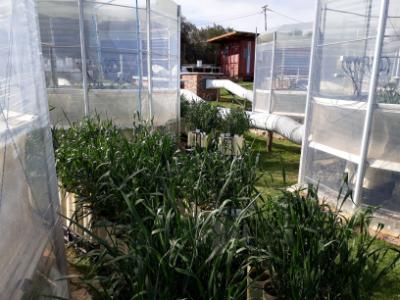 Wheat is of similar importance as a food crop in southern Africa. Peter Mavindidze, a PhD student from the University of Fort Hare under the supervision of Dr. Charles Mutengwa (University of Fort Hare) and Prof Brad Ripley (Rhodes University), investigated the effects of increasing CO2, temperature, and water limitation on 10 cultivars of winter wheat (Triticum aestivum) differing in potential drought and temperature tolerance. Peter investigated the effect of supplying ambient or elevated CO2 to multiple cultivars of wheat grown under irrigation or constrained natural rainfall with soil and dry-atmospheric conditions typical of southern Africa. His focus was on the overall effect of treatments on combined cultivar responses, although interesting between cultivar differences were apparent in magnitude, rather than the direction of the responses. This research was funded by The Winter Cereal Trust.

Ripley, B.S., Bopape, T.M, Vetter, S. 2022. A doubling of atmospheric CO2 mitigates the effects of severe drought on maize through the preservation of soil water. Annals of Botany. 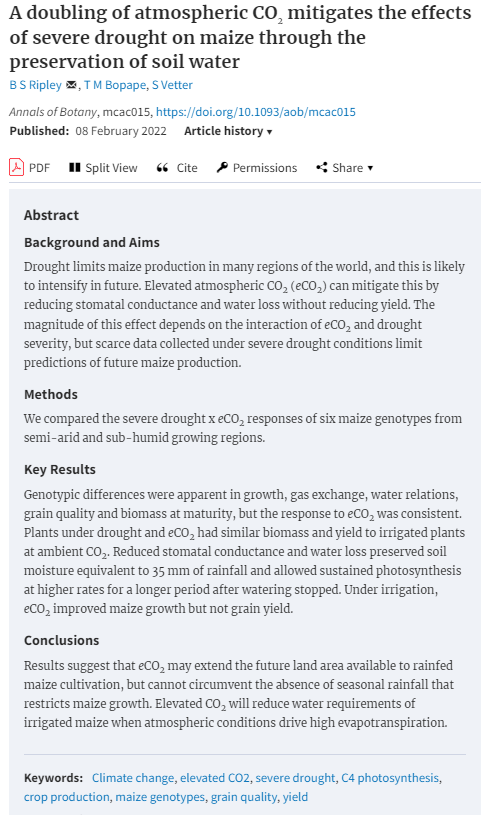