Sorry there was an error sending your form.
Giving to RU
Rhodes>Stanley Kidd House>History

Prof A. Stanley Kidd was originaly a staff member at St Andrews College in Grahamstown. "He joined St Andrews as Mr A. Stanley Kidd, B.A, late Exhibitioner from St John's College, Cambrigde. Before proceeding to Cambridge Mr Kidd took 1st Class Honours in Classics at Victoria University. In the Classical Tripos at Cambridge he was placed in the 1st Division of the School Class, and he obtained a Third Class in the Moral Science Tripos (Part II). Before leaving for Grahamstown he was holding the post of Classical Lecturer at Univeristy College, Sheffield." (S. Andrew's College Magazine, December, 1899, Vol. XXI, No 4, pg 112)

Stanley Kidd was born on the 29 January 1869. He was a professor simultaneously of Greek, Latin, English, History and Philosophy. As time went on, Stanley Kidd was able to settle down and become the Professor of English only.He served on the university senate for many years and was part of influencial decisions that shaped Rhodes to the university it is today. P Haworth succeeded A. Stanley Kidd in 1924 once Kidd had retired from Senate.

Stanley Kidd Retired as a Professor in English in 1932. In 1954 he was awarded an Honorary degree of LL.D. in recognition of his long service to the College and University. He passed away on the 15th May 1956 at the age of 87. 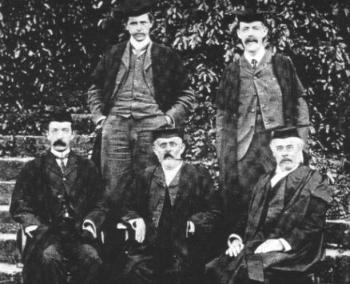 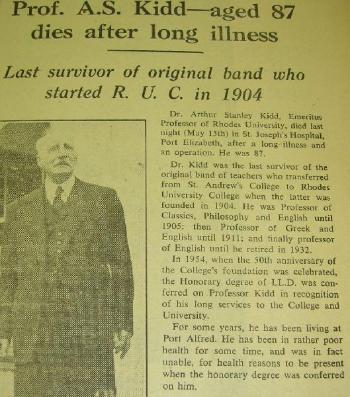 This article can be found at the Cory Library.