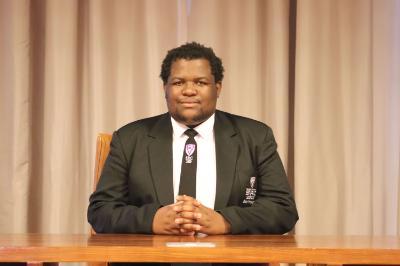 Born and raised in the city of Mthatha,  Masixole is currently doing his final year Bachelor of Sciences with a major in chemistry and botany. He started studying at Rhodes University in the year 2016. Masixole always alludes to the fact when there's an opportunity to lead he always avails himself and this is indicative who he is as a person. This eagerness to lead was evident early on in his journey at the university when served in house comm in 2017. The Vice-President's passion for leadership also extends to his hobbies as he has also been in the committee of the rifle club for the past two years.

He says that his feelings about his election can easily be summed up in two words: relief and joy. He is relieved that he has finally made it into the SRC. With a promise to sustain the same enthusiasm and vigour in how he approaches his duties, he says that he is joyful that the students entrusted him to be their representative and he plans to prove them right for their conviction in what he represents. Masixole's main plan for his term in office is to support the president Katlego Mphahlele, in providing a distinctive Student Representative Council that serves students' interests first. In his time in the sports environment, he has been blessed to grasp the value of teamwork whether one is taking lead or not. This skill has refined his ability to communicate which is a valuable asset for a leader to possess. He also has the perseverance to achieve the things he believes in and this trait will be invaluable to the 2020 SRC.