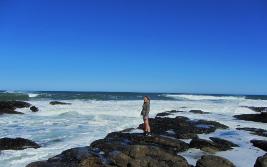 The Prince Edward Islands (PEIs) comprise Marion Island and PrinceEdward Island. This archipelago is situated within the AntarcticCircumpolar Current (ACC). The mass water of the ACC is separated bystrong frontal zones, which in the proximity of the PEIs arerepresented by the Sub-Antarctic Front (SAF) in the north and theAntarctic Polar Front (APF) in the south. This archipelago support ahigh biodiversity of marine and terrestrial species, includingseabirds, penguin and seals. Hydrodynamics play a fundamental role indetermining food availability for benthic populations, which are atthe base of trophic chain. Recent studies suggested that due toclimate changes, the SAF of the ACC has been shifted southwards, thusresulting into a poleward shift in the ACC with consequent changes inthe pelagic marine communities around the islands. My project aims totest the effect of hydrodynamics on benthic populations in thevicinity of the PEIs. Particularly, samples will be processed usingfatty acid and stable isotope analyses.