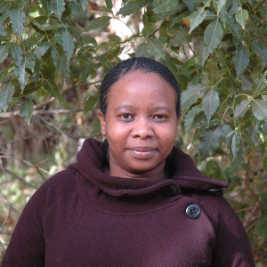 Zezethu’s passion for indigenous plants and how they are displaced by invasive alien plants sparked her interest in the control of invasive alien plants. During her time as an intern she was employed by Eastern Cape Parks and Tourism Agency and based at Great Fish River Nature Reserve. She had an opportunity to manage an alien clearing project using chemical control to clear Opuntia aurantiaca, Opuntia ficus-indica and Opuntia stricta. The knowledge of chemical control drew her to join the Centre for Biological Control as an MSc candidate in 2014 to learn more about another method implemented to control invasive alien plants.

She is currently working on the biological control of Opuntia aurantiaca for her PhD project. Opuntia aurantiaca is considered as one of the most important factors limiting production on the farms. The cochineal insect, Dactylopius austrinus, biological control agent for O. aurantiaca is effective under correct conditions and O. aurantiaca is not yet under control. The weed still forms dense infestations that have a negative impact on agriculture and native biodiversity. The project aims to increase the level of control for O. aurantiaca by mass-rearing and mass-releasing the agent. This will be achieved by quantifying the impact of mass-releases through long-term monitoring, raising awareness about biological control practice to farmers and land managers, and conducting questionnaire surveys about biological control practice and benefits. The desired outcomes are to improve and increase the level of control that is already provided by the agent. This is anticipated to result in the reduction of O. aurantiaca density thus farm productivity improves.