This is where you can pick up the gossip, spread the word, and share a virtual beverage. If you have any news or gossip for the CyberTeaRoom, pass it on to The Editor and look forward to seeing your words in print!

‌Phumuzile Nyoni's poster summarising some of her work for her MSc on leopards in central Zimbabwe was adjudged "best poster" at the recent 5th Annual Diamond Route Conference in Johannesburg (21-22 October 2015). Well done Phumie!

Congratulations are in order for Armand Kok (PhD), Megan Murison (MSc) and Ali Brassine (MSc) who were adjudged runners-up (joint in the case of Megan and Ali) in their respective categories at the recent Southern African Wildlife Management Association Symposium held in Port Elizabeth. The presentations were adjudicated by 13 independent assessors and were assessed on both the quality of presentation and the quality of the science presented. Congratulations are also in order for Rebecca Welch (5th in the MSc category), Michelle Blanckenberg (3rd in the poster category) and Cayley Hunter (4th in the poster category). Well done you guys!!

Papers are invited to be presented at the 19th Congress of the Entomological Society of Southern Africa and the 37th Congress of the Zoological Society of Southern Africa in July 2015. These congresses will be jointly hosted by the Department of Zoology and Entomology, Rhodes University, Grahamstown. The ESSA congress will be run on the 13th, 14th and 15th of July and the ZSSA congress on the 15th, 16th and 17thJuly 2015.  The overlap day will focus on “Invasion Biology”, a theme common to both societies.  Submitted papers should be topical and current. The closing date for all oral and speed title submissions will be 28 February 2015 and the deadline for all online abstract submissions will be 31 March 2015. 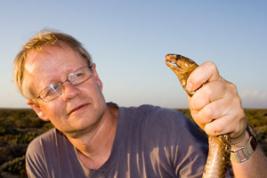 The 2014 Duerden Lecture, in honour of our first head of department - James Duerden, was given by accomplished herpetologist, Graham Alexander from WITS University on 29 May. Professor Alexander enthralled a packed Barratt lecture theatre with his work on the feeding biology of snakes. Professor Alexander's talk focussed on the southern African Rock Python and the Puff Adder, both master ambush predators with amazing adaptations for such a lifestyle. 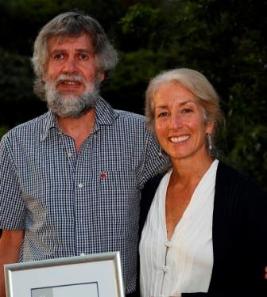 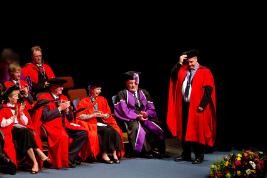 Congratulations to Professor Martin Hill who was awarded the Vice-Chancellor's Distinguished Senior Reseach Medal AND Community Engagement Award at the Science Faculty Graduation Ceremony on Saturday 12 April 2014. Martin and his Biological Control Group's committment to community engagement in the Grahamstown area is an example for all Rhodes academics to follow, not to mention his supreme success in the research realm. Well done Martin!!

The department celebrated the achievements of its graduating students at a cocktail party on Friday 11 April 2014, prior to the science faculty graduation ceremony. The hard work of both first-time graduands and postgraduates was recognised by Professor William Froneman in his short address.

Well done to Sam Page (MSc) and Gareth Mann (PhD) who were adjudged to be the best student presenters in their respective categories at the recent Southern African Wildlife Management Association Symposium held in Skukuza, Kruger National Park. The presentations were adjudicated by the five plenary speakers invited to the conference and were assessed on both the quality of presentation and the quality of the science presented. Congratulations are also in order for Armand Kok (2nd in the PhD category), Zoe Nhleko and Jon Taylor (2nd and 3rd, respectively in the MSc category). Well done you guys!! 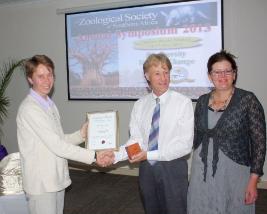 The department celebrated the achievements of its graduating students at an afternoon function on Thursday last week (4 April 2013), prior to the science faculty graduation ceremony on Friday. The hard work of both first-time graduands and postgraduates was recognised by Professor William Froneman in his short address. 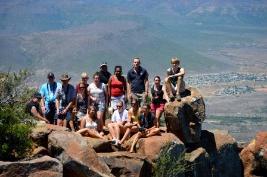 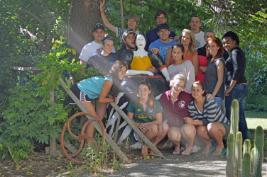 The 2013 Zoology and Entomology class recently visited the Nieu-Bethesda area in the Karoo as a team-building exercise and to learn more about the geology of the region. The group visited the Wellwood fossil collection (the largest privately owned fossil collection in South Africa), the Kitching Fossil Exploration Centre and a few other interesting "haunts" in the quiet little Karoo dorp.