Sorry there was an error sending your form.
Giving to RU
Rhodes>English>Department News

On the first leg of the trip, we were joined in Cape Town by colleagues Maire Tracey, Simon Stanton-Sharma and Matthew Whittle (Kent), where we made the film, All That Is Buried. The film explores South African creativity today and you can read our blogpost about it here.

The film will be screened as part of the Being Human Festival 2022 (17:30-19:00 Friday 11th November) and you can book free tickets here. Makhanda 23rd July-13th August: Amazwi South African Museum of National Literature

Bidding farewell to Maire and Simon, we then travelled with Matt to Makhanda (Grahamstown) to conduct research in the archives held at Amazwi South African Museum of Literature. Amazwi is hosted in a beautiful building that pays homage to some of South Africa’s most influential writers. 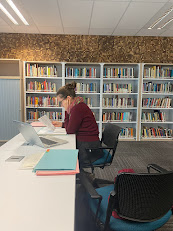 The Museum is a repository for manuscripts, letters and artefacts relating to literature in all of South Africa’s languages, and features exhibitions on South African literary history, some of which can be seen online. A new exhibit on 'Literary Legends' represents Amazwi's commitment to collecting literature in indigenous languages, starting with isiXhosa.
The museum is also currently hosting an adaptation of an earlier exhibition dedicated to Nobel Prize winner J.M. Coetzee entitled Scenes from the South. The original exhibition of key Coetzee papers and artefacts opened on Coetzee's 80th birthday in February 2020, displaying mainly materials held by the Harry Ransom Centre in Austin, Texas. It was then due to travel to York and Austin but this was cancelled due to covid, and moved online as part of the National Arts Festival. Following the end of the period of lockdown in South Africa, the Amazwi holdings relating to Coetzee were then reinstalled for the adapted exhibition now on display.
At Amazwi we were very lucky to have the advice and support of Marike Beyers and Andrew Martin, who helped us to hunt for materials relating to early twentieth-century South African authors. Thanks to their efforts, we were able to dig among letters, manuscripts, reviews, photographs, and scholarly materials about William Plomer, Roy Campbell, Laurens van der Post, Sol. T. Plaatje, Douglas Blackburn, Peter Abrahams, Bessie Head and Perceval Gibbon.

Looking at the museum’s holdings on Douglas Blackburn, many of which stem from Stephen Gray’s research notes, I learnt about his long and very storied career. My interest in him stems from his 1915 novel Love Muti about an interracial romantic relationship; a rare book that would benefit from being reissued so that is could become accessible to more readers. Blackburn is, however, most famous for his novel about a Transvaal official, Prinsloo of Prinsloodorp, but he wrote books on such disparate topics as forgery detection and the secret service in South Africa.

Apart from writing books and novels, he had a highly varied career and life where he was involved in a telepathy scam, bred rabbits, was a forgery expert, worked for the Griqua chief ‘Mfaslin, wrote for and edited numerous newspapers, was charged multiple times with libel and even with assault, was shot in the battle of Pieters Hill in 1900, and even he had to write in multiple times to newspapers to dispute his own death:

As this is the third time the South African Press has killed me, I am about used to reading my own obituary, and I do not know that I would have ventured to dispel the fond illusion, but for the fact that the report is a serious slur on the Loteni district, for within the memory of the oldest inhabitant no white man has ever died there. […] No hint of death has entered this happy region until your paragraph arrived. [1]

Our stay in Makhanda also gave us the opportunity to engage with colleagues at Rhodes University’s Department of Literary Studies in English. We gave a joint seminar on “Global Schreiner” where we presented our research from the forthcoming volume Olive Schreiner: Writing Networks and Global Contexts edited by Jade and Andrew van der Vlies (Edinburgh University Press). Jade spoke about the late 1880s Bloomsbury modernism of Schreiner and Margaret Harkness, while Sanja traced the circulation and reception of Schreiner’s feminist ideas in Swedish early twentieth-century press. The department was very welcoming, from the great pre-seminar lunch put on by Aretha Phiri to coffee meetups with Sue Marais and Head of Department Lynda Gichanda Spencer.

We also had the opportunity to spend time with Schreiner scholars and fellow contributors to Olive Schreiner: Writing Networks and Global Contexts, Paul Walters, Jeremy Fogg, and Dan Wylie, and we enjoyed some food and drinks together. During lunch, Paul and Jeremy very kindly gifted us an inscribed copy of their monograph, as well as copies of the short biography of Schreiner by her niece, Lyndall Gregg. We also made sure to stock up on copies of Dan’s latest works of fiction on sale at the Red Café.

Challenged by Paul to climb the mountain Buffelskop to visit Schreiner’s grave, we headed off on a day trip. After a tricky drive from Makhanda to Cradock avoiding kudu and potholes, and a speedy and sweaty hike up the mountain, we managed to reach Schreiner’s spectacular last resting place and return to the car before sunset. We felt very lucky to see hartebeest, vervet monkeys and blesbok on the walk too!

We also visited the Schreiner House in Cradock where Schreiner lived together with her siblings Theo, Ettie, and Will from 1860 to 1870, and caught up with Lisa Ker (who co-organises the annual Schreiner Karoo Writers Festival) at the Victoria Manor.

A full version of this blog post is available here.
Source:  https://www.southafricanmodernism.com/post/research-trip-to-south-africa-july-september-2022