Sorry there was an error sending your form.
Giving to RU
Rhodes>English>Research

In addition to the diverse projects conducted by various faculty and postgraduate students, the department also has two research projects which are funded by the Andrew W. Mellon Foundation. 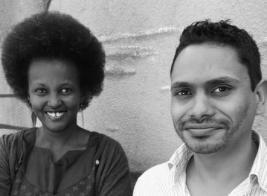 The research is concerned with popular modes of representation and interpretation, and specifically with the ways in which local specificities and global imaginaries are articulated through popular genres.  It seeks to engage critically with various knowledge productions that are embedded in local cultural forms. These popular imaginaries  include, but are not limited to genre fiction such as Crime thrillers,  Science fiction, Speculative fiction, Fantasy fiction, Afro-Gothic, fiction, Chick-lit, and Romance Imprints, literary narratives of new  and "invisible" writers that otherwise go unrecognised but offer innovative cultural productions and new perspectives with which to see and understand contemporary society, new modes of African writing that are  finding expression through modern digital technology, and forms of  popular performance art such as stand-up comedy, music, film, popular media television, radio, magazines and graphic illustrations.

INTERSECTING DIASPORAS: A COMPARATIVE STUDY OF LITERATURE OF THE AFRICAN, LATIN AMERICAN AND SOUTH ASIAN DIASPORAS

Sam Naidu has been awarded a Mellon Inclusive Professoriate grant (2017–2019), which has enabled her to develop a project that focuses on transnational subjectivities represented in literature of the African, Latin American and South Asian diasporas. Underpinned by foundational theories which view diaspora as a social category and transnationalism as a type of consciousness and mode of cultural production, the project’s impetus is to explore imaginary constructions of similar and differing transnational migrant experiences, and to determine the value of representations of hybrid and fluid transnational subjectivities in an increasingly globalised world. Underlying the project is the view that critical appreciation of such fictional representations contributes to a more holistic understanding of the experiences and exigencies of diasporas in broader social and cultural terms.

The project examines literature produced in the African, Latin American and South Asian diasporic contexts, and utilises a comparative methodology to explore the writing of these diasporas in relation to one other. Ultimately, the intention is to compare and contrast various transnational texts in order to describe the complex and paradoxical experiences of diaspora in a world of increasing mobility and de-territorialism, which yet, in certain locations, also faces increased regulation or prohibition of migration.

This project, supported by the Andrew W. Mellon Foundation, is located in the Department of English Literature at Rhodes University, South Africa, and will run from 2017–2019.

Project Title: Watching Over Greater Mexico: The Institute of Mexicans Abroad (IME) and the Limits of Extra-territorial Governance (Book Manuscript)

Teresa Carrillo is a Professor of Latina/Latino Studies in the College of Ethnic Studies at San Francisco State University.

Project Title: The Afropolitan Flâneur: Literary Representations of the City and Contemporary Urban Identities in Selected African and Transnational Texts