“Cry havoc – and let loose the Dogs of War.” Frederick Forsyth didn’t pen the line. He borrowed the dogs of war from William Shakespeare’s Julius Caesar and wrote his book about a British Rambo beating up Africa. It was big stuff in the 1980’s and probably racist by today’s standards.

The opening scene portrays the chaos at an African airport as a country goes up in flames under a dictator. In the darkest hours of the old RSA I often wondered if it could happen here? And I still wonder today.
Many anticipated that the ANC would lose much ground in this year’s election. But they just had to bring out the flags and the struggle songs and all was forgiven. Malema did well, but not as well as some predicted in the weeks before the election.

In the last 10 years we have seen what happens when an articulate leader hits the stage. JZ’sUmshini wam was enough to get rid of Mbeki. Malema can draw a huge crowd with a cow towed in behind a Mercedes. But neither has effectively converted the opportunities they have created.

But what of ‘cometh the hour cometh the man.’ Take embattled Zwelinzima Vavi. He has huge talent and a huge social media presence, 201 000 on twitter alone. He uses it most responsibly. But what if he didn’t? Or if someone else emerges and from nothing to become a modern day cross between Che Guevara and Justin Bieber?

If there were to be a flashpoint event we could be in real trouble. The 1976 Soweto uprising was sort of controlled by massive force from the police, army and reserves. It took everything they had. Remember there was conscription back then.
The crisis following Chris Hani’s assassination was controlled by Mandela and Tutu. But today’s leaders cannot follow these acts.

Could RSA control the social unrest following on from a crisis moment today? I doubt it. Perhaps a jet would arrive at Waterkloof airbase ex India. And that would be it.

We have to trust that the vast majority of the 54 million South Africans are peaceful people. That’s a big ask considering our past and an unemployment rate above 25%.

What would happen if the Ebola virus got into RSA?. I don’t know the first thing about it. But if Ebola got into South Africa’s underprivileged community there would be chaos.

Are we really sure we have all the checks and balances in place. Yes, the airports may be on high alert. But if we cannot currently contain the tons of contraband coming across our Northern border how can we be sure that a fluke case cannot get in. I don’t think we can.

This all sounds like the doom and gloom spread by an old Rhodesian ‘whenwe.’ Get to the point Matthew!. 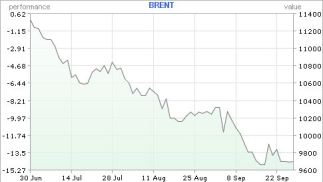 In recent weeks the oil price (right) has dropped significantly.

Yes we enjoyed a fuel price reduction in August. But nothing much happened in September. Why? Our exchange rate tanked, so the Rand price of a barrel of oil stayed constant.

Nobody really understands why the oil price tanked. But it will rally again. Many have been expecting the Rand to tank for some time. The only questions are by how much and when.

So if we couple a rally in the oil price, further decline in the Rand, increases in fuel levies (don’t forget carbon emissions tax is still on the table) and other annual increases, our fuel prices are very vulnerable.
Now add the question ‘ if government has had to bail out Eskom again, how will it get the money back?’ Following the 2008 Eskom crisis we were hit with electricity levy. Hold your breath!

All this fires food inflation.

Next time you visit a convenience store buy a tin of pilchards, a litre of milk and a loaf of bread. Price +-R40. Even if the minimum basic wage were R100 per day, one has to ask is it worth going to work? If you have to get there by taxi then a basic job is not about improving your life, it’s about subsistence.

What can we do about it?

The current tax base of RSA could carry the load if economic growth rates were above 4%. Taxes could even fund accelerated delivery. But 4% growth rates are not even on the horizon.

Perhaps we may even see indications of a change in the national treasury game plan in finance minister Nene’s first big event, the mini budget speech of 22 October 2014. Pay attention!

Corruption and wasteful government expenditure is slowly killing South Africa. Even if Government could regain control, is the private sector going to adopt a business ethos that stops all from participating in the feeding frenzy? It takes two to tango.

We have to acknowledge that RSA’s most limited resource is not Rhino horn. (Not that I am not appalled by the crisis). Every Rand of imports is strangling RSA. We have to promote the culture that ‘local is still lekker.’ And we have to get a hold of RSA agriculture before the country is reduced to a private zoo of exotic animals kept for the enjoyment of a handful of the wealthy and foreign hunters. We cannot stay so reliant on imported food.

South Africa’s social security spend is already R737 billion out of R1,2 trillion. And that’s not enough. We still desperately need a basic income grant and a new health system. These are mountains to climb. The United Kingdom spends 16 times as much per citizen on health than RSA. And the Poms never stop whinging about the deficiencies.

But above all we have to acknowledge that government cannot rescue RSA on its own. Mbeki thought he could and distanced the government from the private sector. This relationship needs a lot of work.

I think we are as close to chaos as we ever have been. But we live in the rainbow nation and many assume that all is just fine unless your name is Oscar. That’s one hell of a assumption.